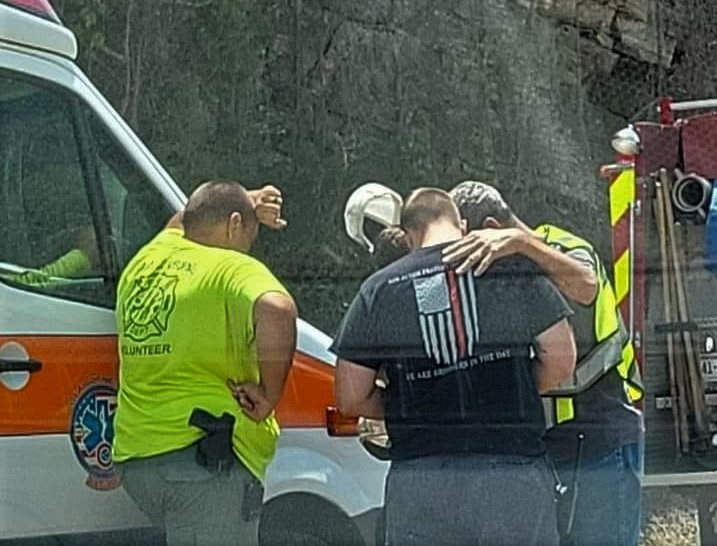 First responders to the scene of the July4 fatality pray for the fallen firefighter. Photo courtesy of WNTT and Brian O’Brien; photo credit – D.D.

The South Claiborne Volunteer Fire Department is minus one firefighter – one who has been characterized as the youngest oldster family, friends and associates ever knew.

Roger Estes, 77, of New Tazewell was directing traffic around a 4th of July event along Hwy. 33 south when he was struck and killed by a southbound vehicle.

Number 408 – Roger’s fire station number – will grace one of the station’s fire trucks soon in honor of the integrity displayed and the nonstop encouragement visited upon others by the veteran firefighter.

Those who knew Estes took to Facebook to express their sadness on the passing of a “real gem.”

Ina Wolfenbarger thanked everyone for their continued prayers.

“He is at home now with his Heavenly Father. Continue to remember the family, and the South Claiborne Volunteer Fire Dept. family. It’s hard when they lose one of their own. Roger Estes, you will be missed by all!”

Melanie Mcpherson Taylor said in her comment that she had just found out about the passing of a fellow work employee at Ferguson.

“He was a firecracker of a man. He would outwork any of us. And, was also a retired firefighter who still actively volunteered his help in his community. He was one-of-a-kind. RIP Roger Estes. He will truly be missed by so, so many. – never forgotten.”

“Prayers for this wonderful man’s family because he was their all in all,” reads a comment posted by Rachel Maples. “I had the pleasure of working closely with Roger Estes for 14 years. He was a servant to others. Everything he did …he was all in! I used to tell him that he had lived a thousand lives because he had done so many things. He truly loved being a firefighter…he told me many stories. When I left Ferguson, I hugged him and he cried with me. He was a true person of purpose! There will never be another. I will see you again, friend.”

Ryan C. Ridley put words to post as he spoke of Estes.

“Roger was a great partner who never said ‘no.’ Roger was always the first to volunteer to complete the task at hand. Roger was a Good Jake.”

Estes honorably served in the U.S. Navy for 8 years. He was a firefighter in New Hampshire for 22 years prior to his move to Tennessee where he later joined the SCVFD.

“This week has been a very traumatic week for not only the Claiborne County first responder family, but also the close and personal family of South Claiborne Fire Department firefighter Roger Estes. He was not only a firefighter for quite some time but also an all-around beautiful human being to have in your presence,” reads a comment by a spokesperson for the SCVFD on its Facebook page.

The post includes the details of a fundraiser dinner to help cover funeral and other expenses.

The benefit dinner will be held on July 9 from 10 a.m. to 2 p.m. at the Claiborne EMS south station, located behind the Claiborne Medical Center in Tazewell.

The plate lunch will include a choice of hamburgers or hotdogs, chips and a drink.

Charges are currently pending for the 47-year-old male driver of the vehicle who allegedly hit Estes.

The firefighter will take his last ride on July 9, beginning at 1 p.m. The procession will leave Claiborne Funeral Home in New Tazewell, arriving at the Claiborne High School prior to the 2 p.m. visitation, which will be held inside the multi-purpose room. The funeral service will begin at 4 p.m. directly following the visitation.