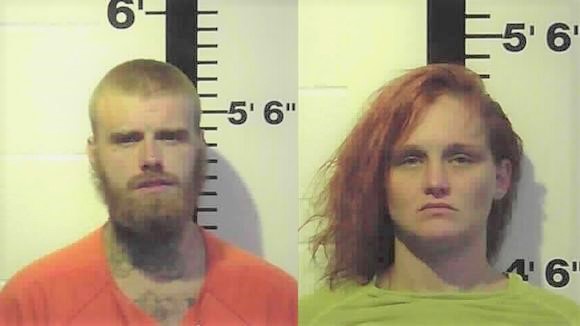 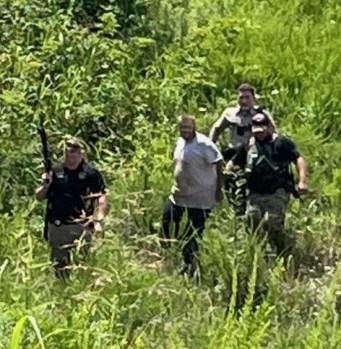 The chase is over. Captured by officers. Photo courtesy CCSO

Two individuals from South Carolina allegedly decided to do a little shopping without paying. Area law enforcement was led on a high speed chase on July 27 as the couple sped from the Dollar General Store in Tazewell giving chase through the twin cities while a lockdown was placed on an Englands plant. The suspects were eventually arrested with the help of patrol helicopters.

Andrew Newby, 27, and Danielle Blackwell, 33, of Greer S.C. were apprehended in a wooded area in south Claiborne County after evading arrest in a stolen vehicle. The Nissan Altima they were using reportedly topped speeds of 100 mph at times.

The stolen vehicle was first spotted by an officer in the parking lot of the Raceway Market. The cat and mouse game continued as the couple sped away, heading southbound on Hwy. 33. The convoy of law enforcement cruisers continued pursuit, following the stolen vehicle onto Englands Industrial Drive. The roadway was hastily blockaded as, moments later, the Nissan Altima crashed.

Newby and Blackwell evacuated the car, heading out on foot toward the wooded area behind the England plant.

The two were captured with the help of a couple of Tennessee Governor Marijuana Eradication helicopters that had been under surveillance of the area.

The stolen merchandise, valued at nearly $400, was reportedly recovered from a tote located in the back seat of the vehicle.

The two were wanted in South Carolina in connection to a residential burglary by force, kidnapping and theft of a motor vehicle, among other charges.

In Claiborne County, Newby and Blackwell were each charged with fugitive from justice, theft over $10,000, felony evading arrest and shoplifting. Newby is additionally charged with theft of merchandise under $500.

Officers of the Tazewell and New Tazewell Police Departments along with officers from the Claiborne County Sheriff’s Office, the Tennessee Highway Patrol and the Tennessee Bureau of Investigation were involved in the capture of these two fugitives.