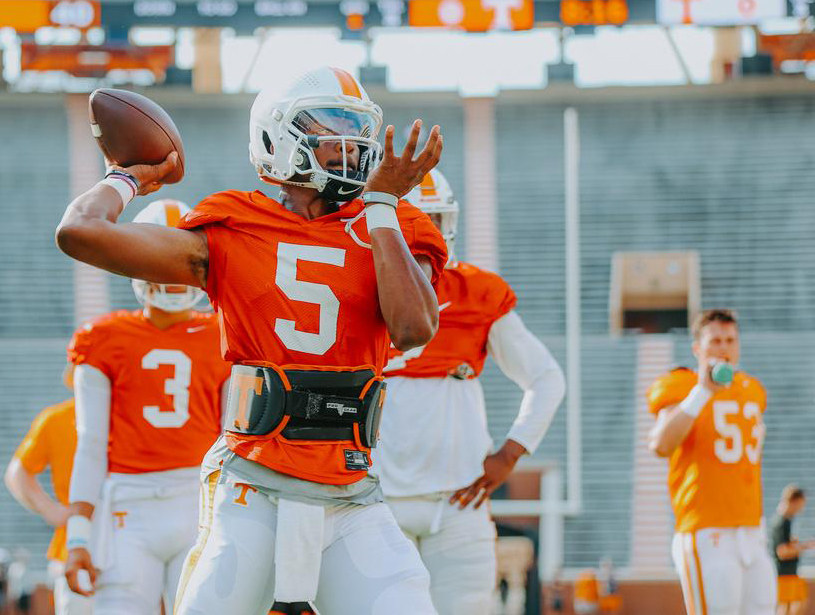 Tennessee football wrapped up another four-day block of preseason workouts with its second scrimmage in Neyland Stadium on Sunday morning, and head coach Josh Heupel said the Volunteers executed at a higher clip on both sides of the ball.

“I thought there were a bunch of positives today in the scrimmage,” Heupel said. “We played cleaner on both sides of the football. Executed. I thought alignment, assignment, eyes on keys, being lined up and ready to go on the defensive side of the football, tackling in space. I thought we did a much better job in those areas than we did in the first scrimmage.”

Tennessee worked close to 100 plays with the first-team offense going against the first-team defense, as well as the second team and third team seeing action against each other.

The Battle For Left Tackle

Senior Jeremiah Crawford and redshirt sophomore transfer Gerald Mincey continue to battle it out for the left tackle position with veteran Darnell Wright having solidified right tackle. Wright enters 2022 having made 29 career starts with 1,851 offensive snaps in his three previous seasons. Crawford played in 10 games in his debut season, while Mincey joined the squad in January after two seasons at Florida.

“It’s been back and forth a little bit through training camp,” Heupel said. “Both of them have made a bunch of progress from spring ball, and really since the beginning of training camp, in understanding what we’re doing offensively. In the run game, playing with better pad level, being able to create some movement up front. Both of them have taken major strides in the pass pro side of it, too. I feel like those guys are continuing to progress as they should.”

“Warren Burrell has had a really steady, good camp,” Heupel said. “(De’Shawn) Rucker coming back healthy, feel like he’s playing his best football right now, as well. There is a ton of competition right there at that position. That’s some young guys that have gotten here, guys that have been around this program for a couple of years, too.

Heupel invited players’ families to the scrimmage on Sunday. It was their first taste of Neyland Stadium this fall, which will seat 101,915 after upgrades to two areas—a lower-west premium club and upper south end social deck. Families then had the opportunity to eat lunch with their sons inside the practice facility.

The Volunteers will have two off days this week—Monday and Thursday—while practicing on Tuesday, Wednesday and Friday. Kickoff for the Sept. 1 season-opener is nearly two weeks away.