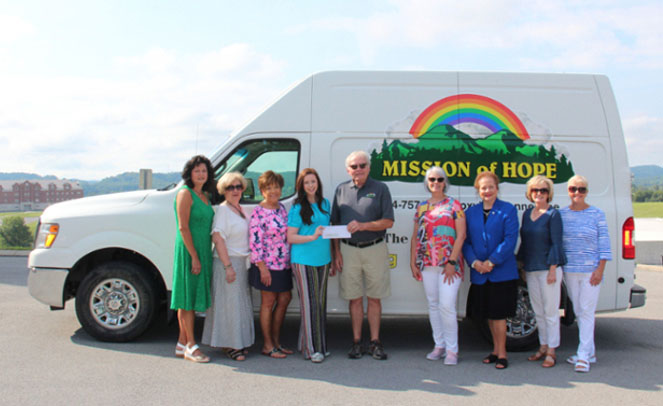 The Lincoln Memorial University (LMU) Women of Service (WOS) recently made a donation to Mission of Hope to support relief efforts for flood victims in Southeast Kentucky. Mission of Hope Executive Director Emmette Thompson stopped at LMU’s main campus in Harrogate on his way to the flood zone. LMU WOS members and LMU staff presented Thompson with the donation.

“We can’t thank the Women of Service and LMU enough for this help,” said Thompson. “There is tremendous devastation in the areas we are assisting.”

The Mission of Hope has taken truckloads of items to several counties in its service area that were affected by the flooding that occurred at the end of July 2022. During a few days’ time, heavy rain brought deadly flash flooding and devastating river flooding to Eastern Kentucky and central Appalachia. The rainfall totals observed during the event were 600% of normal, according to the National Weather Service. The overwhelming amounts of rain lead to at least 39 deaths and widespread catastrophic damages. Entire homes and parts of some communities were swept away by flood waters.

Established in 2011, the LMU Women of Service is open to all women who want to help students at LMU. By living as an example of service, WOS members teach LMU students about the mission of service to humanity. The Women of Service Fashion Show and the Christmas Festival are dedicated to raising funds for scholarships and other WOS initiatives. The WOS has provided 15 scholarship awards to date and also supports five food pantries and a student career closet.

The Mission of Hope has served rural Appalachia since 1996. It ministers to the people of various counties in Kentucky and Tennessee from which 80% of the region’s residents no longer have jobs in the coal mining industry. It is a year-round ministry that provides assistance such as Christmas toys and school clothing and supplies for impoverished families, assistance in repairing homes, developing skills or other expertise for the creation of new or expanded jobs in the service area, and scholarships for qualifying students.

Lincoln Memorial University is a values-based learning community dedicated to providing educational experiences in the liberal arts and professional studies. The main campus is in Harrogate, Tennessee. For more information about the undergraduate and graduate programs available at LMU, contact the Office of Admissions at 423.869.6280 or email at admissions@LMUnet.edu.