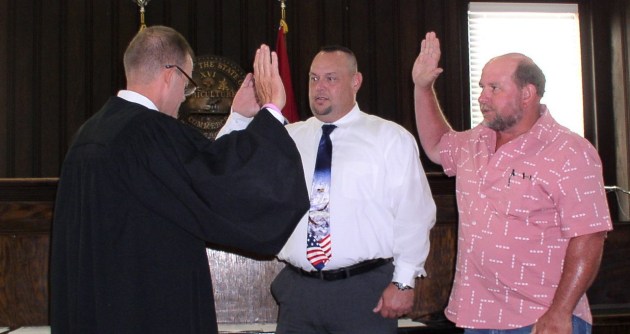 District I County Commission winners Zachary Bunch, left, and Dennis Cook take their oaths-of-office during the official swearing in on Aug. 31. – photo by Jan Runions

The recent election netted a few new faces in the crowd of officeholders who showed up on Aug. 31 to undergo their official swearing in. Circuit Court Judge John McAfee officiated as the lower than normal key ceremony got underway with the oaths taken by those who won their district commissioner seats.

District 1 winner Zachary Bunch sat out four years, returning as one of three victors in the recent race. He and ‘newbie’ Dennis Cook stood together as they promised to perform their duties for the next four years to the best of their abilities.

McAfee spoke about growing up with Cook and how, as boys, the two had spent many a happy time inside the Claiborne County Courthouse, using the building as a ‘romper room’ of sorts.

Bunch and Cook won their seats with 488 and 485 votes respectively, handily knocking down their opponents incumbent Charlton Vass and hopeful Jodi Whitaker.

District III winners incumbent Stacey Crawford and newbie Tim Shrout performed their official oaths-of-office together as two-thirds of the district’s commissioner count. Incumbent Mike Campbell, who makes up the other third of the district III team, was absent from the ceremony. Incumbent Nicholas Epperson lost his seat just shy of 25 votes.

A tie between district VI competitors Rosemary Barnett and Mona Dotson netted a postponement of the official swearing in for one of the three seats until a runoff race during the November elections decides the winner. Meanwhile, incumbents Carolyn Brooks and Steve Mason took their oaths-of-office, having garnered enough votes to win over hopefuls Don Bryant and Virginia Giles.

The last oath taken was reserved for 40-year veteran Kimberly Reece, who has held down the office of Register of Deeds since 1982.