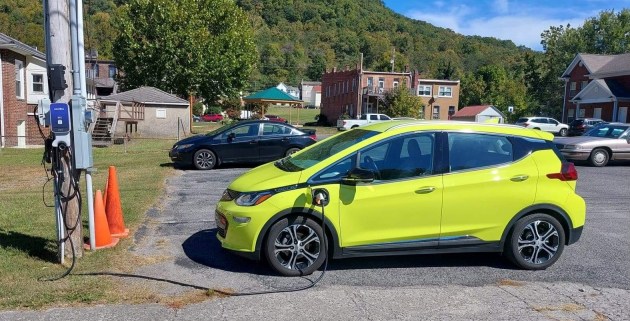 The first draw of electric is caught for posterity on Oct. 4 as the brand new electric vehicle charging station pumps vital ‘fuel’ to an electric car. The station is located at the town parking lot in Cumberland Gap.- courtesy photo 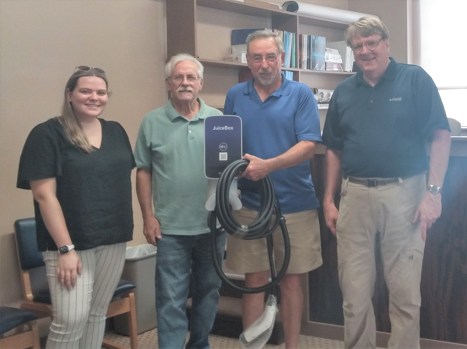 Talks began nearly a year ago to bring an electric charging station to the Gap. U.T. Professor Tim Ezell, far right, stands with the other principles during a pause in the discussions. Also shown are, from the left: Zoe Cirhfield, Danny Chumley and Cumberland Gap Mayor Neal Pucciarelli, who is holding the device. - photo submitted

The historic town of Cumberland Gap has taken a giant leap into the future of motoring with the powering up of its second electric charging station. The first, privately owned by the Olde Mill Bed & Breakfast, is installed behind the B&B building.

The first draw of electric from the newest station in town was conducted on Oct. 4 and from all reports, the charge was perfection.

Who knew that the Gap would be the beneficiary of a political science class’s assignment to study just how successful an electric charging station would be within a small rural area.

Now that the new station is up and running, the class will be monitoring its progress and gleaning suggestions via interviews with town folk. Those suggestions will go into a plan that will be submitted to the Appalachian Regional Commission for review.

Talks between the town and U.T. Political Science professor Tim Ezzell, who is also the assistant research professor, began about a year ago, according to Gap Mayor Neal Pucciarelli.

“We are excited about this project,” said Pucciarelli. “We are one of the first, if not the first town to have one of these charging stations in the area.”

Pucciarelli says the location of the new device will be included on all websites dealing with charging stations.

“Anyone with an electric car can simply google ‘electric charging station’ and the websites will direct drivers to our town,” said Pucciarelli.

The new station is located at the town parking lot, behind Papa Chum’s Shop and across from the Cumberland Gap Hotel.