Vols dominate in rout of LSU 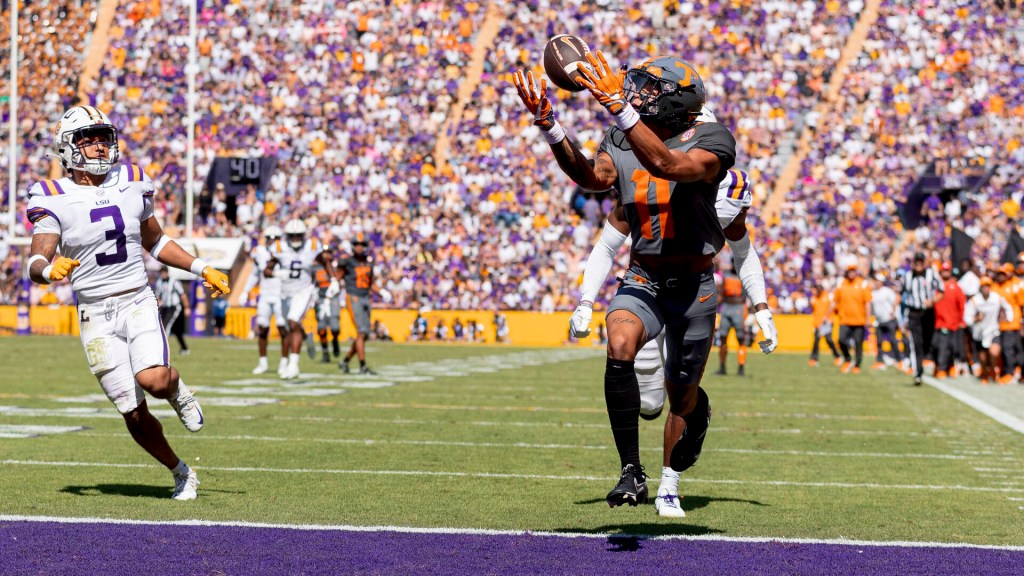 From the opening kickoff it was all Tennessee as the eighth-ranked Volunteers dominated 25th-ranked LSU 40-13 Saturday at Tiger Stadium in Baton Rouge.

Tennessee (5-0, 2-0 SEC) posted 503 yards of total offense and did so with balance, picking up 272 rushing yards and 239 passing yards and the defense made critical plays when it needed too. The Vols forced LSU (4-2, 2-1 SEC) into turnovers on the opening kickoff and their last play from scrimmage and stuffed all three Tiger fourth down plays.

Redshirt-senior quarterback Hendon Hooker was marvelous yet again, tossing two touchdowns, both to Jalin Hyatt, and rushing for 56 yards on 10 attempts. The captain has been incredible in the 2022, upping his season totals to 1,432 yards passing and 10 touchdowns with no interceptions. Hooker’s efforts were matched by Jabari Small on the ground and both Bru McCoy and Hyatt in the pass-game.

Small accumulated 127 yards on 22 attempts and punched in two rushing touchdowns. The Memphis, Tennessee, native eclipsed 100 yards on the ground for the first time this season and has scored six times out of the backfield.

McCoy had a career day, gaining 140 receiving yards and passing the century mark for the second time in as many games. He caught seven passes and recorded 70 yards after the catch in the victory. Hyatt matched McCoy’s effort in the slot, reeling in four passes for 63 yards and pair of house calls in Baton Rouge.

The strong defensive effort was highlighted from an impressive day by edge rusher Byron Young who recorded 2.5 sacks, all coming in clutch spots. All three sacks came on either third or fourth down, with the most critical being the 4th and 10 takedown of LSU quarterback Jayden Daniels for an eight-yard loss that allowed Tennessee to get in field goal position at the end of the first half. Senior safety Trevon Flowers capped the victory with his second interception of the season with nine seconds left in the contest, snaring the back-corner fade in the endzone.

Tennessee will return to Neyland Stadium for the third Saturday in October when the top-ranked Alabama Crimson Tide come to Knoxville for a top-10 matchup. Kickoff is scheduled for 3:30 p.m. on CBS.