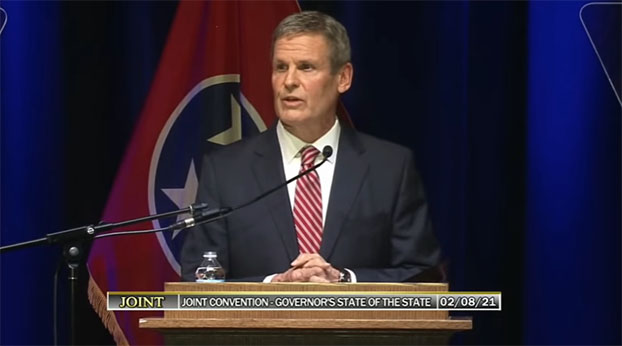 Tennessee Gov. Bill Lee was given a “D” by the Cato Institute in its annual Fiscal Report Card on America’s Governors.

Lee’s ranking was based on his spending and taxing record, including this year’s Tennessee budget, which included $500 million toward a new Tennessee Titans stadium. The state has also agreed to giving sales tax to the team at both its stadium and a 130-acre still-to-be-determined plot set for development around the stadium.

“He scored fairly poorly in this report because of large spending increases and a lackluster record on taxes,” the report said. “He proposed large general fund budget increases the past three years, and in 2022, the budget jumped 21 percent.”

Lee also led a push last year to give $884 million in incentives to Ford for its planned $5.6 billion electric truck plant outside of Memphis. This year, the state did remove doctors and osteopathic physicians from its privilege tax.

The report also cited a one-month grocery tax holiday in August along with a one-year moratoriums on state individual vehicle registration fees along with sales tax on gun safes.

Cato Institute gave an “A” grade to Kim Reynolds of Iowa, Chris Sununu of New Hampshire, Pete Ricketts of Nebraska, Brad Little of Idaho, and Doug Ducey of Arizona. All are Republicans.

It gave an “F” grade to Tim Walz of Minnesota, Tom Wolf of Pennsylvania, J. B. Pritzker of Illinois, Gretchen Whitmer of Michigan, Phil Murphy of New Jersey, Kate Brown of Oregon, Gavin Newsom of California, and Jay Inslee of Washington. All are Democrats.