5 things to know about Tennessee’s win over UT Martin 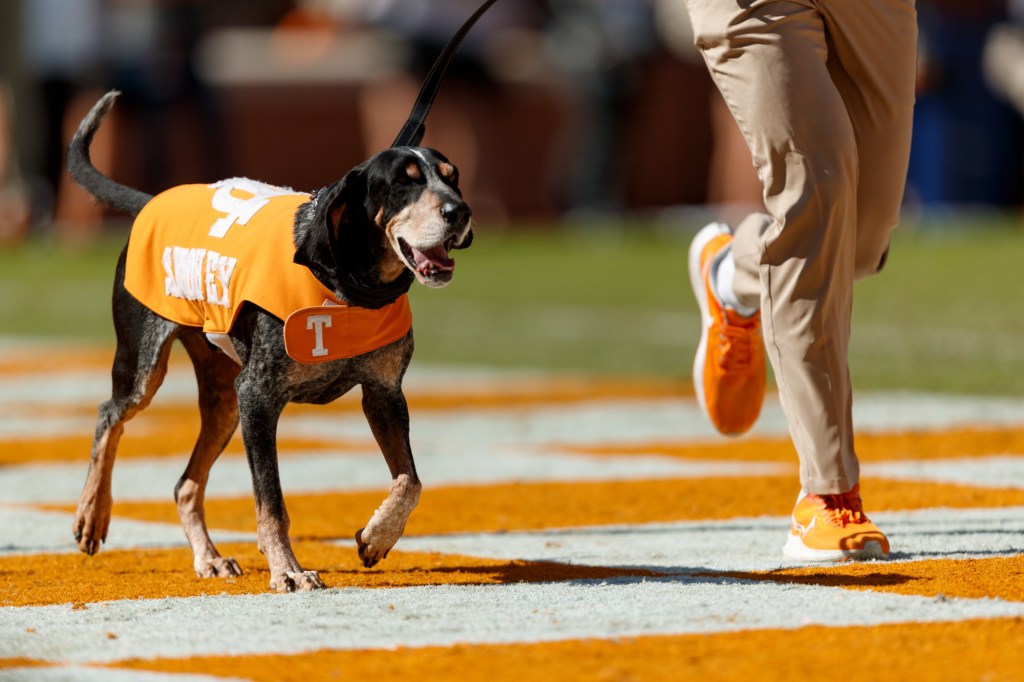 Smokey X has been the Vols’ mascot since 2013. UT Athletics photo

The Vols celebrated their homecoming on Saturday by welcoming the UT Martin Skyhawks to another sold-out Neyland Stadium. Tennessee came away with a 65-24 victory, improving its record to 7-0 on the season.

1. Offense put on a show

Saturday saw another historic milestone for this Tennessee offense. The Vols’ 52 first-half points were the most scored by the Orange and White in any half in the modern era (since 1933), surpassing the previous record of 49 in the first half versus Louisiana-Monroe on Sept. 23, 2000. The 65-point performance was also the most points scored in a game by Tennessee since scoring 70, also against ULM.

Entering the game averaging an FBS-best 551.0 total yards per game, the Vols finished with 696 total yards on Saturday—a Heupel-era high and the second-most yards in a single game in school history. The Vols have eclipsed 600 yards of offense twice this season and four times overall under Heupel, and Tennessee has totaled 500 yards of offense in six of seven games this season and nine times overall under Heupel.

On the receiving end, Tennessee has had a receiver go for more than 100 yards in six consecutive games this season. Four different individuals have surpassed the century mark on the year, with Jalin Hyatt doing so three times and Bru McCoy doing so twice. Hyatt’s two scoring grabs on the day made him the first Vol wideout to record multiple receiving touchdowns in three straight games since Marcus Nash in 1997 and gave him 12 touchdowns for the year, tying him for second in a single-season in program history with Cedric Tillman (2021) and Cedrick Wilson (2000). Squirrel White added his name to the list with 122 receiving yards and a touchdown, marking the second time in the Heupel era that two Vols eclipsed the century mark in the same game.

The Volunteer defense continues to excel in giving the offense extra possessions, recording a pair of takeaways, two turnovers on downs and five three-and-outs. The Big Orange didn’t allow a third-down conversion on any of the Skyhawks’ seven attempts during the first half. For the game, UT Martin was 3-of-13 on third downs.

Defensive back William Wright snagged his first career interception during the opening frame, leading to a Tennessee touchdown on the other end. The Vols have picked off at least one pass in five of their seven games this season and have six total interceptions from four different defenders. Tennessee had another takeaway before the end of the first half. Senior safety Trevon Flowers forced his second career fumble in the second quarter, which was recovered by linebacker Aaron Beasley. Just two plays later, Hooker found Hyatt on a screen and the speedy receiver did the rest, scampering 22 yards to paydirt.

Redshirt senior tight end Princeton Fant had a career day against the Skyhawks and was responsible for three touchdowns in the first half. Fant’s first score came from the 1-yard line with a fullback dive. In the second quarter, he recorded a career-long 11-yard rush to pick up his second touchdown of the game on the ground. Then, off a lateral pass from Joe Milton III, Fant launched his second-career pass attempt, and first completion, for a 66-yard touchdown strike to Jalin Hyatt. Fant became the first non-quarterback Vol to record a passing touchdown for Tennessee since wide receiver Jauan Jennings tossed a 4-yard score to Joshua Dobbs at Texas A&M on Oct. 8, 2016. Fant ended the day with 95 yards of combined offense (66 yards passing, 17 yards receiving, 12 yards rushing).

In the second quarter, Tennessee welcomed to the field Smokey X and introduced Vol Nation to Smokey XI, the next in line of the famous Bluetick Coonhound breed who’s famous howls roar throughout the Tennessee hills. Smokey X has been a staple of the Volunteers since his debut in 2013. Dawning a interlocking UT vest which pays homage to his ancestors, Smokey X is set to retire at the end of the season where he looks to spend his days getting lots of pets, earning lots of treats and enjoying time with his family.

Smokey XI begins his ramp up to take over full-time duties as the faithful Tennessee mascot, making his first appearance in front of a sold-out Neyland Stadium that roared with life upon his opening introduction to the sea of Orange. The special ceremony saw Smokey XI come out with his dad, Smokey X, and his family, the Hudsons.

Enactment of the initial version of Title IX on June 23, 1972, set into motion a sequence of federal legislative progress that prompted leadership at the University of Tennessee to accelerate efforts to enhance its athletics opportunities for women.