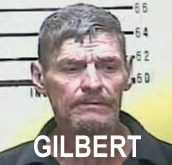 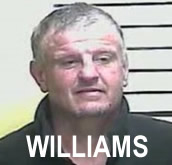 Two Harlan County men were arrested Wednesday night during a routine checkpoint in Bell County on a variety of drug charges.

Arrested were Ronald Williams, 47, of Coldiron, and James Gilbert, 66, of Loyall.

Upon conducting a traffic stop, Williams failed to provide proof of valid insurance and a driver’s license. He was also seen continuously moving around inside of the vehicle, along with Gilbert, who was in the passenger’s seat, in what appeared to be an attempt to hide something. Southern then asked Williams to exit the vehicle to conduct safety pat down. K9 Chan was then deployed and alerted to the driver side exterior door.

Also on scene was Sgt. Frank Foster, who assisted in searching the vehicle where he located a small pistol tucked in between the driver’s seat/center console and a rifle laying in the back, across the floorboard.

Deputy Southern then confirmed through dispatch that both Williams and Gilbert were previously convicted of multiple felonies. Dispatch also confirmed the rifle to be stolen. Both men were booked into the Bell County Detention Center.