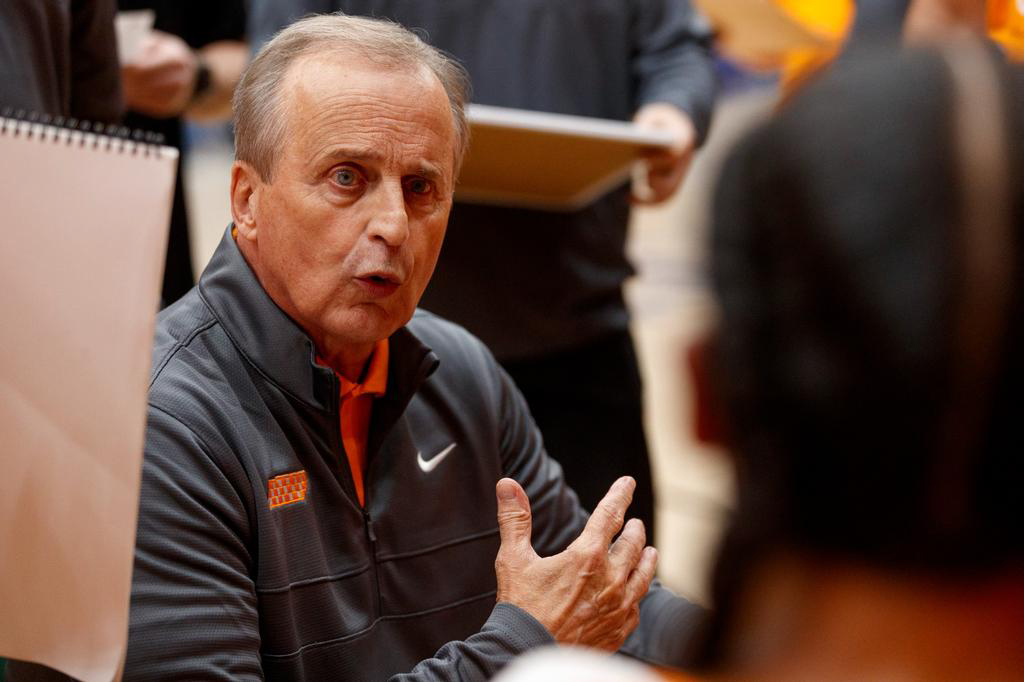 Head Coach Rick Barnes of the Tennessee Volunteers during the Legends of Basketball Classic exhibition game between Tennessee and Gonzaga in Frisco, Texas. UT Athletics photo by Ian Cox

A second-half explosion and five double-figure scorers led the way for No. 11 Tennessee, as the Vols ran past No. 2 Gonzaga on Friday at the Legends of Basketball Classic exhibition, 99-80.

After heading into halftime trailing by four points, Tennessee outscored Gonzaga by 23 points in the second half—holding the Bulldogs to 16 points in the game’s final 13 minutes after they scored 64 points in the opening 27 minutes.

Making his first appearance in a Tennessee uniform, graduate transfer Tyreke Key led the way with a game-high 26 points on 8-for-12 shooting, including 4-for-7 from 3-point range.

Nkamhoua recorded a double-double on the night, pulling down a game-high 14 rebounds.

Defensively, the Vols limited preseason AP All-American Drew Timme to 8-for-18 shooting on the night. Preseason second-team All-SEC selection Josiah-Jordan James did not play for Tennessee.

Neither team led by more five points for the first 29:10 of the game, but Tennessee took control of the contest by going on a 12-1 run to take a 77-65 lead—highlighted by five points apiece from Key and Plavsic.

From there, Tennessee continued to steadily built its lead. After trading baskets with the Bulldogs, the Vols rattled off another run—this time 12-2, capped off by a Phillips 3-pointer to push Tennessee’s lead to 91-72 with 5:16 remaining.

Neither team led by more than five points during a high-scoring, back-and-forth, first half—with Gonzaga taking a 54-50 lead into the break.

Six players made multiple field goals during the first stanza for the Vols, led by Key—who scored 16 first-half points on 4-for-5 shooting, including 3-for-3 from beyond the arc. Zeigler had eight points and five assists.