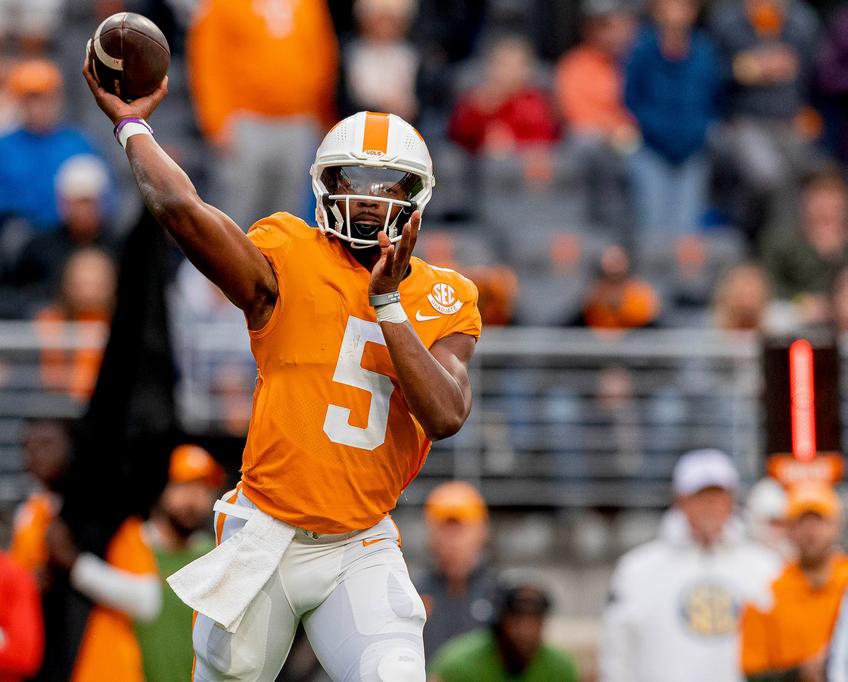 With a sellout Senior Day crowd of 101,915 on hand, No. 5 Tennessee unleashed a school-record offensive performance and scored 38 unanswered points over the final two quarters to waltz past Missouri, 66-24, in its final appearance of 2022 at Neyland Stadium.

The Volunteers, who played in front of their sixth consecutive full house at home for the first time since 2006, improved to 9-1 overall and 5-1 in the Southeastern Conference. The Tigers, meanwhile, fell to 4-6 overall and 2-5 in league play.

UT generated 724 total yards of offense, including 460 through the air and 264 on the ground to break the old mark of 718 set versus Troy in 2012. The Vols managed Saturday’s explosion against a Missouri team that had entered the match-up ranking 13th nationally in total defense, allowing 304.1 yards per game.

The point total by the Big Orange was the most the program has scored against an SEC opponent. The previous high was 65 against Vanderbilt in Nashville in a shutout on Nov. 26, 1994. It also ranked as the third most points produced in the modern era (1933-present) behind a 70-3 home win over Louisiana-Monroe on Sept. 23, 2000, and a 68-0 home triumph over Tennessee Tech on Oct. 27, 1951.

The Vols eclipsed 50 points for the fifth time this season, representing the most 50-point games in a single season in school history. The previous record of four occurred in 1914, 1993 and 2015.

The player responsible for igniting Tennessee’s offensive fireworks sizzled in his final game on Shields-Watkins Field. Quarterback Hendon Hooker carded the fourth 300-yard passing effort this season and seventh of his career, finishing 25 of 35 for 355 yards and three touchdowns. The redshirt senior also carried eight times for 50 yards and a score. It was his third game of 400 yards of total offense this season and fourth as a Vol with the 405-yard effort vs. Missouri. He now ranks sixth for total yards in a season at Tennessee with 3,293.

Junior wide receiver Jalin Hyatt finished the day with seven receptions for 146 yards and a touchdown. He surpassed the 1,000-yard mark for the season with a 30-yard catch in the second quarter. He now has 58 catches for 1,116 yards in 2022, carding the 10th 1K receiving season in Vol history and becoming the ninth player to accomplish that feat, with Joey Kent the only UT receiver to do so twice.

Hyatt’s 1,116 yards rank third best in a season at Tennessee behind Robert Meachem (1,298, 2006) and Marcus Nash (1,170, 1997) with two games to play in the regular season. With his touchdown reception Saturday, Hyatt also built onto his school record with score No. 15 on the campaign, a number that is tied for the sixth best in SEC history.

Other offensive stars included redshirt junior receiver Bru McCoy, who had his third 100-yard receiving day with 111 on nine catches, and freshman running back Dylan Sampson, who led the ground attack with a career-best 98 yards and a touchdown on eight carries.

The Vols hit the road next weekend to take on South Carolina at Williams-Brice Stadium in Columbia.