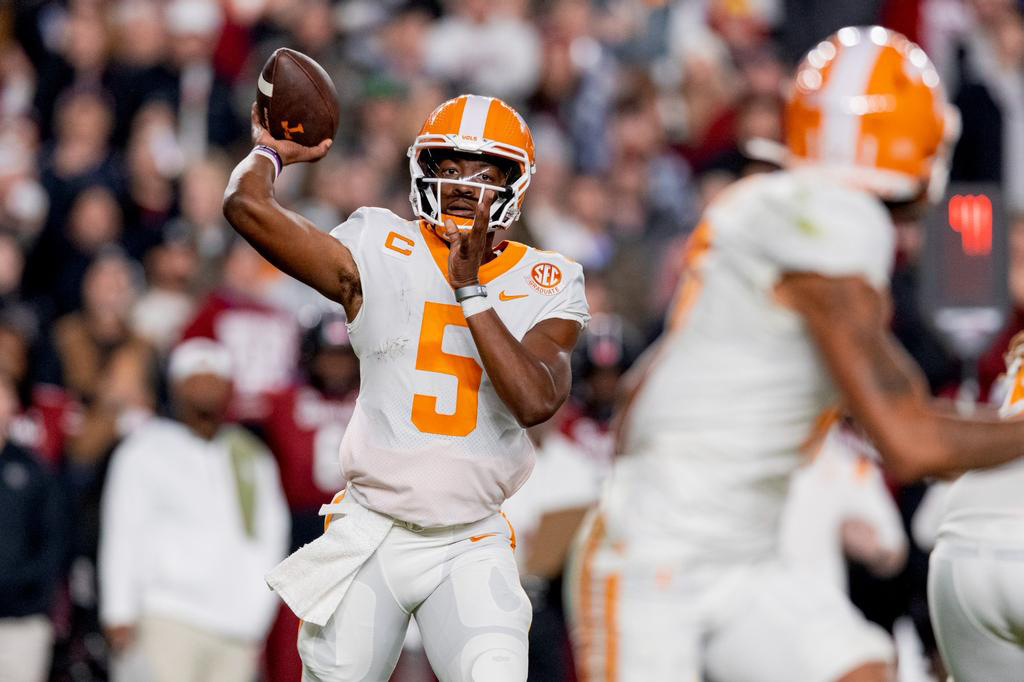 A red-hot South Carolina offense could not be held down as the fifth-ranked Tennessee Volunteers fell to the Gamecocks, 63-38, on Saturday night in Columbia.

It was an offensive battle from the jump as the two sides combined for 59 points in the first half. South Carolina (7-4, 4-4 SEC) put up 21 points in the first quarter and followed it with a pair of scores in the second. Tennessee kept the pressure on with offensive success of its own, tossing up a 17-point second period and going into the half down just 11.

The Vols (9-2, 5-2) came up with a stop on South Carolina’s opening drive of the second half and turned it into points as Hendon Hooker found Princeton Fant streaking up the middle of the field for a 41-yard touchdown. Narrowing the deficit to four was as close as the Vols would come to evening the ballgame in the last 30 minutes.

Hooker finished 25-of-42 with 247 yards and three touchdowns before exiting the game due to injury with 11:28 remaining in the fourth quarter. He connected with Cedric Tillman (three yards) and Bru McCoy (seven yards) for his other two scores. Jabari Small would also get into the end zone with a rushing score, dashing 31 yards to paydirt on the Vols’ opening drive.

Tennessee would score a final touchdown with 1:14 remaining in the game as Joe Milton III delivered the ball to Tillman in the back corner of the end zone.

Tillman finished the night as the Vols leading receiver, posting 81 yards on nine catches and a pair of touchdown grabs. It marked his third career multi-touchdown contest and his first of the season.

South Carolina opened the game with a score on their first drive, but it wouldn’t take long for the Vols to answer. After a pair of completions to open the game, Hooker and Small ripped off back-to-back long runs as Hooker escaped a closing pocket and found space, running for 29 yards and getting the Big Orange into plus territory. The very next play, Small took an inside handoff from the shotgun, made a linebacker miss and was off to the races punching in a responding touchdown in just 64 seconds.

Rattler then orchestrated a couple of quick-strike drives propelled by long passes to take a 21-7 lead. The Vols would again answer with a 14-play, 75-yard drive that started in the first quarter and ended in the second. It was a meticulous sequence capped by a fourth-down conversion from the three-yard-line when Hooker tossed his first touchdown of the game, a corner fade to Tillman near the left pylon.

The Gamecocks rattled off four more touchdown scores and racked up 606 total yards of offense to Tennessee’s 507.

The Volunteers conclude the regular season at 7:30 p.m. Saturday at Vanderbilt.