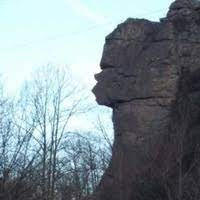 Frances Pendleton and Mrs. McDowell were killed nearby in the same year and Chief Benge was the alleged culprit. Two years elapsed before Benge was again reported in the Moccasin Gap area.

He murdered Harper Ratcliff and his entire family, six in number in 1793. Soon thereafter along with two companions he fired on a man named Williams. He took Williams’ female slave but she was able to escape after two days. Benge’s red warriors murdered many other settlers and were responsible for taking and destroying much of their property during this bloody era.

In early April of 1793 Moses Cockrell and two or three men were leading several packhorses from Rye Cove to Powell Valley. A writer of the period took the opportunity to write of the events that followed when Chief Benge met Moses Cockrell.

“Benge was remarkable for his strength, activity, endurance and great speed as a runner,” he noted. “He was a man of more than average intelligence and a man of great bravery and strategy. On more than one occasion he approached the settlements so secretly that he fell upon the scattered settlers without them knowing of his presence.

“He then took leave and retired to his home beyond the Cumberland Mountains without leaving a trace of the route he had traveled even though rangers were constantly on the lookout for his trail. One of these rangers of the Holston settlements was a man by the name of Moses Cockrell.

“Cockrell was famous for his size, strength and survival instincts. Benge and Cockrell were rivals in manhood and woodcraft. It seemed both were intent on fighting each other in mortal combat. The opportunity arose when they met atop Powell Mountain before it became Lee County.

Each seemed jealous of the other’s prowess and courage and recognized the opportunity when they met a few months before Benge’s last incursion into our area. They met on top of Powell’s Mountain, in what is now Lee County, each with a band of followers.

“The Indians observed the approach of the settlers and prepared an ambush. Benge instructed his companions not to kill Cockrell so that he might run him down and capture him.”

Two of Cockrell’s companions fell when the shooting began. He saw at once the folly of combat with a dozen savages so he sprang down the mountain-side like an antelope with Benge in pursuit. Two miles away in the valley on Wallen’s Creek was the cabin of a pioneer that Cockrell knew and he quickly realized that was his best chance of escape.

Benge was gaining on him but he made a desperate effort and increased his speed. As Cockrell leaped over the fence that surrounded the cabin, Benge threw his tomahawk. It sunk in the top rail of the fencing with a thud as Cockrell scampered across the yard and into the cabin. Benge fled back to his companions in disgust as he didn’t know how many men and rifles were in the cabin.

Cockrell died a few years later on the north fork of Lee County. At his wake an old comrade said, “Poor Cockrell was a noble fellow whether he was after injuns or varmints.

I hope he has gone to where there is as much game and as desperate a range as he had here.”

Fourteen persons were killed on the road to Kentucky that same week. The settlers discovered the Indians preparing to attack and tried to fire the first volley of shots but failed. Only two of the settlers made their escape and five Indians lay dead as well as one renegade white man. Both parties broke at the same time at the end of the battle and ran in opposite directions.

Joseph Martin led his initial group to build Martin’s Station on property he had in Powell Valley. He would return a second time.

He held many commands during the time of these incursions by Logan and Benge. In 1787 he became a primary Indian Agent for North Carolina which included a much greater land mass than it does today. In that post he dealt with John Sevier and William Blount who were both destined to become great Tennesseans.

In 1789 he sold his land holdings in Powell Valley and returned to Henry County to live.

His Indian wife went to South Carolina to live with her aging mother.

Martin was prominently mentioned as a candidate for governor of Virginia in 1790 but was content to serve for many years in the House of Delegates. Light Horse Harry Lee became governor instead and Lee County was named for him when it was formed in 1792.

One of Lee’s sons, Robert E. Lee was destined to lead the south in the Civil War.

Governor Lee appointed Joseph Martin the Brigadier General of Virginia in 1793. He later served on the commission that settled the boundary line between Virginia and Tennessee. The task was magnified because of the double lines of Dr. Thomas Walker and Judge Richard Henderson. This caused many disagreements between border residents for many years.

As late as 1808, Joseph Martin made a journey through Indian territories at the request of the government. His health deteriorated during his travels. He was worn out physically when he returned and suffered a stroke and died on December 18, 1808 at the age of 68.

Martin distinguished himself throughout a long life of public and military service.

Wilderness Road State Park in Lee County, Virginia, has proven to be popular among tourists and features the rebuilt Martin’s Station Fort, less than ten miles from world-famous Cumberland Gap. Thousands of park visitors and Indian and pioneer re-enactors visit during special events and activities each year.

Editor’s note: We’ll wrap up this story in Jadon’s From the Mountains next week.