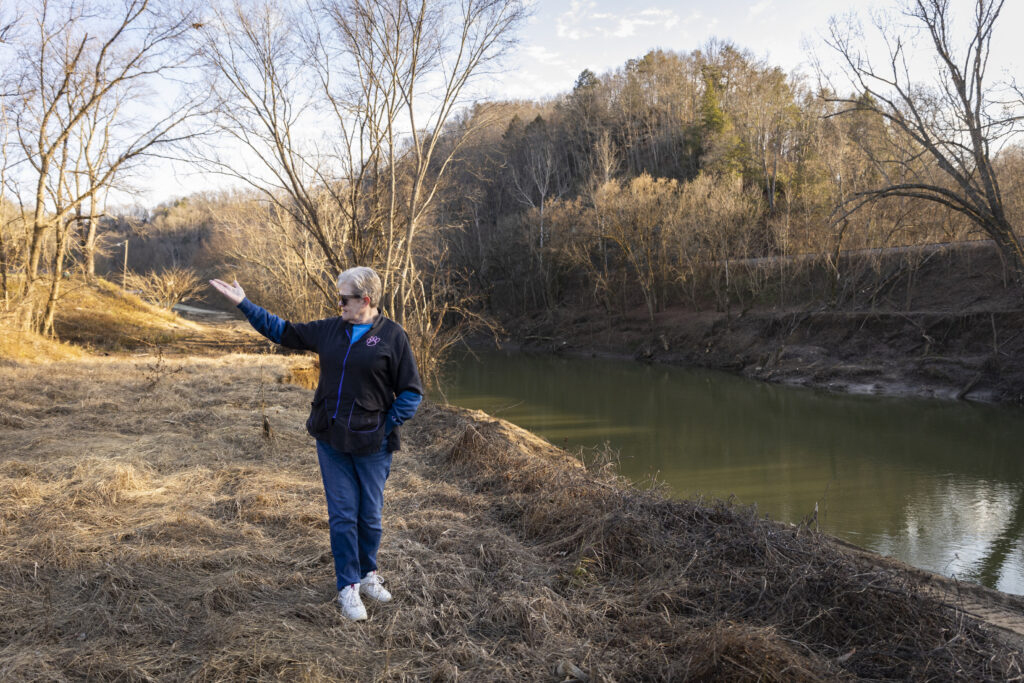 Nancy Herald motions back to her home that was damaged in both the March 2021 and July 2022 floods while standing near the bank of the North Fork of the Kentucky River in Jackson, Kentucky on December 19, 2022. Photo by Arden Barnes for the Kentucky Lantern

When the 2021 Eastern Kentucky floods came, Nancy Herald’s basement filled to the rafters.

She lost roughly 50 years of cherished Christmas decorations stored along the concrete wall, along with the washer, dryer and refrigerator.

Because of that experience, the family thought they’d be ready when the 2022 floods came more than a year later. They emptied their basement of recently-replaced items and moved them upstairs, thinking everything would be safe on the main floor.

That was not the case. They lost all they’d replaced from 2021 – and much more.

Located in Kentucky’s mountains less than two hours southeast of Frankfort, Breathitt County was home to almost 14,000 people before the floods.

The Herald family is one of many here who were flooded both times. They, and many others, are survivors twice over, left to ponder whether to uproot themselves and leave or risk rebuilding where they are, fearing more floods in the future.

A Kentucky Lantern reporter and photographer spent three days in mid-December reporting in Breathitt and Perry counties talking to survivors of the double floods about their experience rebuilding their entire lives twice.

Many said they had just finished – or were well on their way to – replacing all the items lost in the 2021 waters when the 2022 rains came. They lost not only their progress, but more of their belongings than ever before.

Some have since left the region while others say they will when they can afford to do so. Others still have no choice but to return to land owned by their families and rebuild there in the floodplain.

No matter if they stay or go, they must rebuild a whole life from the ground up – a massive effort that some estimate could take a whole decade.

They want to see state and federal lawmakers invest in long-term housing solutions, which they say are a must for any stable economic rebound.

Scott McReynolds, executive director of the Housing Development Alliance in Hazard, previously estimated the region needs at least 2,300 new or rebuilt houses at a cost of more than $600 million.

“It’s going to take years and we will have to find ways to recoup the lost population and the lost tax revenue,” Thomas told the Kentucky Lantern.

‘We knew the water was coming’

After the 2021 Eastern Kentucky flooding, Herald and her family worked to repair the damage done to the home her parents built in 1974. They put in new drainage and repaired a crumbling retaining wall leading to the basement.

“It cost us a lot of money that we had to pay ourselves,” the Jackson woman told the Kentucky Lantern. Those 2021 floods devastated the region, the worst in about half a century.

The Federal Emergency Management Agency — better known as FEMA — recommended  she get flood insurance in 2021. But, because she was working to replace a lifetime of household belongings, she could only afford the minimal amount.

Then, in summer 2022, “we knew the water was coming,” Herald said of the July floods that killed 44 people and displaced thousands.

“We knew we didn’t want to stay in the house and be … marooned and stranded and maybe need assistance,” she added.

So, her family left their home place before the North Fork of the Kentucky River could rise from behind the house and cut off their exit.

Before leaving, though, she moved her replaced belongings from the basement upstairs, figuring the lower area would flood once again.

Resting on the library shelf was her Grandma’s Bible. She left it behind because she thought it – and the whole upstairs – would be safe.

“When it was over the house had about four feet of water,” she said. “And the things we had carried upstairs were, of course, destroyed.”

That family Bible was cemented with mud on the shelf and covered in mold. Along with many other belongings, Herald could not save it.

On top of the physical toll and loss of property, the floods were – and continue to be – traumatic mentally. Some said their anxiety increased during the disaster and continues to be severe.

“Physically it’s very, very hard. Financially, it is devastating,” Herald said of the back-to-back floods that forced her family to start over again and again. “Emotionally, it’s crippling, and, mainly, it is life altering.”

After a historic flood destroys your home twice, she explained: “You don’t think the same. You don’t view things the same way.”

“I don’t think I am as sharp as I was,” she said, adding that: “I really think people suffer from PTSD. And people say, ‘Yeah, it’s OK to grieve.’ I know it’s okay to grieve, but I don’t have to  like grieving.”

Mayor Thomas agreed. Her constituents’ mental health suffered from the catastrophic waters, she said. Even those who didn’t lose belongings watched as their loved ones and neighbors suffered.

“Just the whole disaster of seeing people in pain and seeing what people are going through…It has affected everyone,” she said. “We just heard stories of people holding on to each other and seeing family members washed away or holding onto a tree limb for six hours.”

Those images and experiences stick.

“Rain has taken on a whole new meaning since, even, ‘21,” she added. Whenever there’s rain in the forecast, she said, people worry about how many inches could come, what damage it could do. “And so we do hear a lot of that…that people are really stressed.”

“We needed that because FEMA was slow,” said Sheffel. “People needed money immediately.”

She passed out $200 per household at her discretion, she said. As she did so, she collected people’s trauma stories.

“Every house we stopped at, everybody wanted to share their story…I think that’s where the mental health part comes into play for me is that we shouldered a lot of that, which is fine, but I felt like I was not qualified…” Sheffel said. “I couldn’t really give any feedback. I just listened.”

Some survivors told the Lantern that now, five months later, they would benefit from on-the-ground mental health therapy.

Many who spoke with the Lantern said they were so grateful for what they had – their life, health, and in some cases, their faith. Most pointed to neighbors who lost more than them and said they felt blessed.

More than concern for themselves, many locals said they worried about the family down the street, a loved one, the children.

‘You think these kids are OK’

Grief counselors came into Marie Roberts, one of the schools where she works, after the flood. They gave children the option to draw some of the things they lost in the waters, Henson said. One child drew the school’s missing secretary. Another drew a family member found too late.

“You think these kids are OK until they start talking,” Henson told the Kentucky Lantern. She said the school staff’s strategy all semester was to put on a normal face for the kids, but it was difficult.

“We always (ask) ‘what did you do this summer?’ and you try to get away from the flood stuff,” Henson said. “But when a child looks at you and says, ‘Well, I almost drowned,’ …what do you say to that, except for ‘we’re glad you’re here and that’s all it matters’?”

Despite all they’re going through, Henson said her kids’ grades did not plummet and they let no work slip.

Why stay in a floodplain?

Many left Breathitt County after the most recent flood, and others told the Lantern they plan to when they can. But many others plan to stay, rebuild, and hope floodwaters don’t come again for another 100-plus years.

Despite their fears that the land might flood again, this place is home.

“The culture here is a real appreciation and love for place,” explained Wallace Caleb Bates, who is from Jackson and sits on the board of Aspire Appalachia. “Land carries so much more value than just being property to live on. It’s something that folks pass down through generations. And for a lot of families who deal with intergenerational poverty, their land is something they can pridefully pass on … across generations.”

Many who thought they lived high enough to avoid 2022 damage were wrong. The water kept coming, kept rising.

“Because of the landscape, I think it’s going to be hard to get everybody out of the floodplain,” Sheffel said. “And also, like, what even is the floodplain anymore?”

Those who do stay will face many challenges in the coming years, a big one being the diversification of the local economy, and long term housing solutions.

“If you’re losing…revenue and your budgets are based on a certain amount of revenue, then … there is … legitimate concern that the city could charge the people additional tax dollars to make up for the loss,” said Mayor Thomas.

But, she wants to avoid tax increases. “I don’t believe in that,” she said. “I think that we need to look for creative ways to expand the tax base and to … bring in new people and you can’t bring in new people if you don’t have anywhere to house them. And we need jobs, we need industry.”

The push and pull between long-term economic growth and immediate survival is an “ongoing chicken-egg thing” there, she added.

Bouncing back could take a decade, some estimate.

Some locals estimate it will take Jackson five to 10 years to recover from the double flooding, provided it doesn’t happen again in the near future.

Herald’s flood home is now gutted, cold, empty. The river bank is gone and the cliff above the water is closer to the house now. Dried and muddied corn stalks, trampled into the ground, missed their chance at harvest.

The invasive kudzu that washed in with the 2021 floods stayed and took over the back yard. It masks only partially the upside-down shed at the back of the lot. Herald doesn’t know where it came from.

She also doesn’t know if she’s coming back to this house. She received $11,000 from FEMA in 2022 after an agent called the structure a “total loss.” The family now lives in a home about a half mile away.

“Right now, we don’t have plans to go back,” she said. “Honestly, I want to see if it floods this winter. And if it floods next spring. I want to see how much more erosion there is. … And I keep coming back to this, but it is so true: psychologically, emotionally, I’m not ready to let go of it. Because it’s home, even though home is where I live with my family.”

She walks through the skeleton of the flood house and she shakes her head over and over. Nothing left but beams where walls once were. She points to the place on the wall where the lost Bible sat. Downstairs, there’s still dried mud on the basement ceiling pipes.

Maybe the structure will be home again, Herald muses. Maybe.

But: “It’s scary…because you don’t know what’s coming next.”

She always comes back to the water, the worry over losing everything again.

“Maybe it will happen again and then again maybe it won’t,” she said.  “That’s the thing, that uncertainty. You just don’t know. That’s why we aren’t willing to take a chance on it. We just don’t know if we’re going to go back or not.”

For now, the stray calico cat her family calls Floodgate – who appeared after the summer disaster – meanders in the abandoned yard.