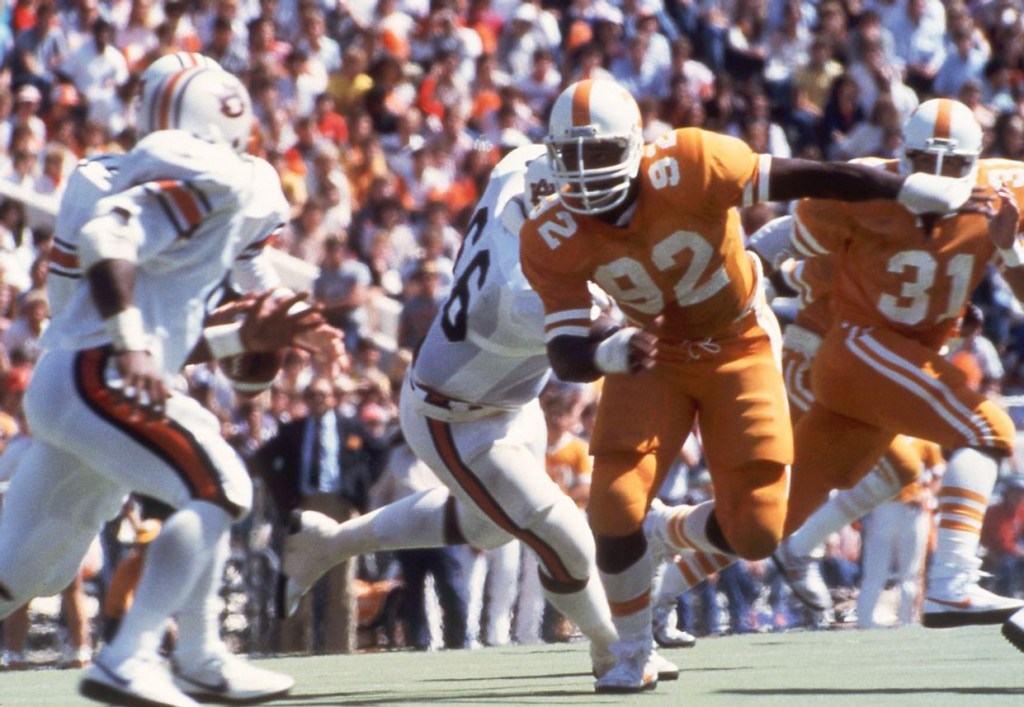 Volunteer great Reggie White (92) moves in for a tackle in a game at Auburn in 1980. White was posthumously inducted into the Hula Bowl Hall of Fame. UT Athletics photo

Legendary Tennessee pass rusher and Pro Football Hall of Famer Reggie White was inducted posthumously into the Hula Bowl Hall of Fame at an awards ceremony on Jan. 12 in Orlando.

Before becoming the NFL’s most feared pass rusher, the “Minister of Defense” was a consensus All-American and the SEC Player of the Year in 1983 after gathering a school single-season record 15 sacks as a senior. A team captain, he registered 100 tackles that fall in leading the Vols to a nine-win campaign and a Citrus Bowl victory over Maryland.

In 42 career games played, White collected 293 tackles and a school-record 32 sacks before dominating in the 1984 edition of the Hula Bowl.

White signed with the Memphis Showboats of the USFL where he played for two seasons before joining Philadelphia in the NFL. In a 13-season career with the Eagles and Green Bay Packers, he was NFL Rookie of the Year, an 11-time Pro Bowl performer and a member of a Super Bowl winning team.

The Hula Bowl was established in 1946 and has featured the game’s greatest players. The 77th edition of the all-star contest will be played on Saturday at noon ET on CBS Sports Network.

The Hula Bowl Hall of Fame was founded in 2019 to recognize the greatest collegiate players and coaches to have participated in a Hula Bowl All-Star Game. Since its inception in 1946, the Hula Bowl has featured more than 6,000 players from every D1 college and multiple D2 and D3 schools.