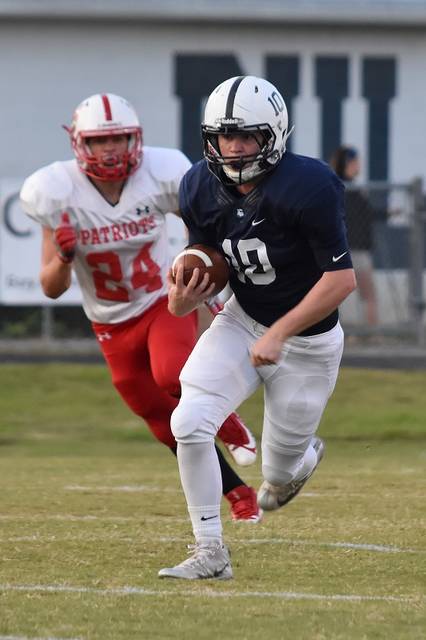 Elijah Beason had another great night.

Union County (1-2) brought its Patriots football team to Bulldogs Field Sept. 8 and the weather was finally feeling more like football with a cool breeze blowing and fans bringing out the long sleeves and jackets. Union County is an improving football team and are looking for that signature win to prove that they are back. They were seeking another big win to back up the one against Cosby.

Claiborne (1-2) was coming off a loss and needed to right the ship and get back to winning football. They entered the game through a giant inflatable helmet provided by the Tennessee National Guard. The Bulldogs received the kick but then went four and out getting stopped on a fourth and five.

The Patriots behind Dalton Truan drove the ball into the red zone. On a forth down, QB Joey Chamberlain converted and had a first and goal from the seven. The Patriots scored on a pass to Adam Bryan. The PAT was good making it 7-0 Patriots.

Storm Livesay took the short kickoff and almost broke it; however, the Bulldogs possession ended in a punt but backed the Patriots up. The Bulldogs defense was then penalized giving the Patriots the ball near the 30. The Patriots tried a reverse for the first down plays later by Matthew Wyrick and were stopped. On a fourth and four, the Patriots punted and the Bulldogs began on their own 13.

Bryce Laws went up the middle and reached midfield. Elijah Beason took a hand off right up the middle and slammed into the secondary for a nice gain just before the quarter ended 7-0. Beason then had a first down run to the 11. Bryce Laws took it 11 yards to the house for the touchdown. Grayson Howard’s PAT tied the game at 7.

UC fair caught the kickoff on their own 17 and began their next drive. A big defensive sack by Lukas Neely forced fourth down and a punt. At 8:52 the Bulldogs took over on their own 40. Laws busted a run for the Bulldogs’ second TD of the game and the PAT somehow made it through to make it 14-7.

The Patriots started their next drive from their own 29. Claiborne held on defense and forced a punt. They started on their own 27. The Bulldogs fumbled the ball on forth down but recovered. They didn’t reach the yard to make and turned it over on downs.

The Patriots took possession on the Bulldogs side of the field. A fourth and 12 pass was completed for the first down and allowed UC to continue the drive. At the 2:00 mark, the Patriots were on the nine yard line and looking for points. The Patriots got a field goal out of the drive with 22 seconds remaining before the half. The score was 14-10 CHS.

The Patriots got the ball to start the third quarter and drove the ball behind Truan into Bulldogs territory. At the 8:11 mark, the Patriots faced a fourth and four and called a time out to think about the play. Truan ran for the first down and one play later he put his team in the red zone. They continued their drive and Truan scored at 5:06. The PAT was good and the Patriots led again this time at 17-14.

The Bulldogs started the ensuing drive on their own 32. Beason took a pitch and ran for a first down. Beason got the call again and went 45 yards for the TD at 3:41. The PAT by Howard was true and the home team had the lead again at 21-17.

On the kickoff, UC got the benefit of a personal foul penalty and had the ball on the 41. The Bulldog defense did their job and forced UC into another punt. With the ball on the 38 the Bulldogs stayed with the ground attack and had a third and three as the quarter ended 21-17. Beason had to get two yards for the first and ran for about 20 as the drive continued. The Bulldogs picked up a big first down with 10:30 to go and Beason rushed the ball to the five. Beason scored at 8:38 and the PAT was good to extend the Bulldogs lead to 28-17.

The Patriots punted on their next possession and the Bulldogs behind Neely reached the 30 and then an unsportsmanlike penalty by the Patriots moved the ball to the 15. Laws scored two plays later with 4:53 showing on the clock. The PAT was good and the Bulldogs led 35-17.

The Patriots then allowed their reserve players get some minutes as the clock ticked away. The Bulldogs did the same but Greg Goins scored at the 1:00 mark and Howard hit his sixth PAT of the night to extend the lead out to 42-17. The Bulldogs finished the game and got the win 42-17.

After the game Coach Nathan Medlin spoke about how his Bulldogs lived up to the challenge, “We challenged them this week and they showed up and played hard. We are proud of their effort. We finally figured out how to run our offense tonight and we made our blocks and played well on defense and were fortune enough to come out with a good win.”

The Bulldogs will next travel to Unicoi County to face the 1-3 Blue Devils.