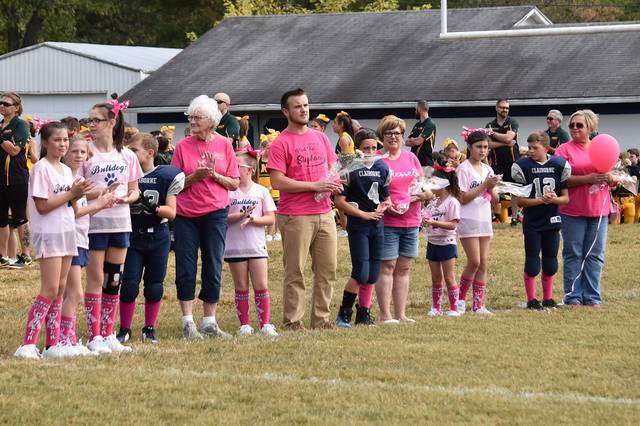 Here are just a few of the many walkers taking part in the survivor walk.

The first game started under cloudy conditions and comfortable temperatures. The Grasscutter Bulldogs had a rough time of it as the Northview Cougars were able to find the end zone early and often. The Bulldogs never scored on their way to a disappointing 28-0 loss. The Super Grasscutter Bulldogs did not fare too well either against the Cougars. The Bulldogs also failed to score in this game and allowed the Cougars to win 20-0.

Following game two, the Breast Cancer Survivors walked out on the field and were applauded for their fight against the disease and the ones that could not be there in person had family members walk in their place or in some cases in their memory. The ceremony featured pink balloons that were released at the end and those balloons rose quickly into the cloudy blue sky. The brave and determined survivors walked off the field to a standing ovation.

The third and final game featured the Pee Wee Bulldogs and they played pretty well. On offense they could move the ball but were only able to find the end zone once. The Cougars completed their drives and were able to win the game 26-7 and sweep the days competition.

The football action was not like the Claiborne fans wanted but they left feeling good about the day because of the brave survivors that had brightened their day.