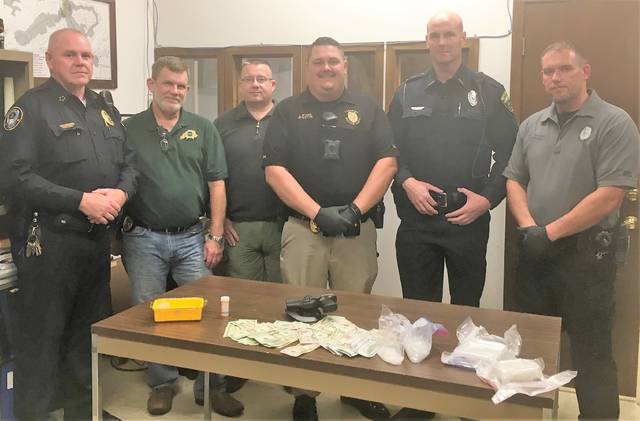 A joint investigation with several law enforcement agencies resulted in a large methamphetamine bust and the local arrests of two men, one a homicide suspect from Georgia.

As of Monday evening, several were awaiting pending federal indictments as a result of the multi-agency investigation.

A release from the Middlesboro Police Department stated that Cowan arrested Sean Knack, 24, of Middlesboro, Kentucky, during a traffic stop at Yoakum Apartments around 7:30 p.m. Nov. 7.

Along with the weapon and other evidence, $3,250 in cash was seized.

“The tip from Sgt. Cowan led to a vehicle stop conducted by Officer Andrew Sturgill (of the TPD) and the assisting agencies, which led to room 6 of the Dixie Plaza Motel (in Tazewell),” Myers said. “That’s where a wanted homicide suspect from Georgia had rented a room.”

After a search of the room, 2 pounds, 8 ounces of crystal methamphetamine was located, he said.

The man arrested in Tazewell is Steven James Turbeville, of Winder, Georgia.

“He was wanted for homicide and has an extensive criminal history,” Myers said.

Turbeville was arrested and taken to the Claiborne County Jail. He is charged with possession of methamphetamine over 5 grams for resale.

“As the investigation widens, Sgt. Cowan and Lt. Myers have contacted other agencies with information that is likely to result in further seizures and/or drug trafficking charges,” the MPD release stated.

“This case illustrates the effectiveness of interagency communication and cooperation in drug enforcement efforts,” Sharpe stated. “As the drug abuse problem in the country has evolved, so has the necessity for reachign across jurisdictional lines to combat the problem. Lt. Myers and Sgt. Cowan, as lead investigators, are to be commended for their work and the results.”

After the initial arrests in Middlesboro and Tazewell, two search warrants were executed in Georgia, Myers said.

“Several thousand dollars and more pounds of crystal meth were found,” he added.

All departments involved continue to stress the importance of community involvement in drug enforcement work. Tips and observations from citizens often lead to the arrest and conviction of drug traffickers.