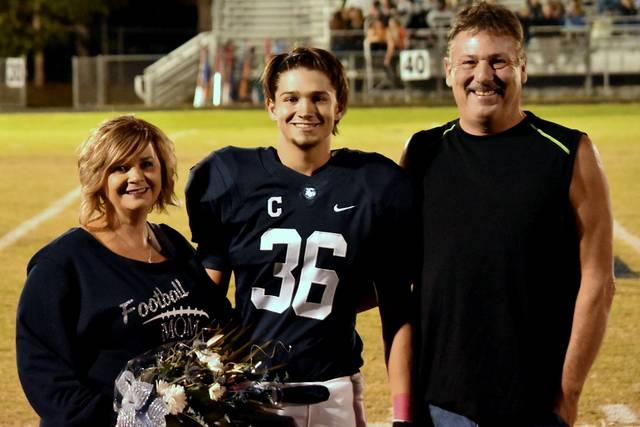 Lukas Neely along with his parents, Donna and Jeff Neely.

Claiborne High School Bulldogs senior football player Lukas Neely continues to rack up post-season awards. To date he has been named to the First Team All State, Lakeway Defensive Player of the Year, Third Team All-Prep Extra, Region 1, 3-A Co-Defensive Player of the Year and Region 1, 3-A First Team All-Region as a defensive lineman. His accolades are well deserved and according to Nathan Medlin he was great to coach and fun in practices.

“Lukas was a great player for us. He always gave tremendous effort and competed every snap. Pound for pound, he might be the toughest player I’ve been blessed to coach. Lukas made everyone around him better and his personality made workouts, practices, and games so much fun. He is a very smart young man with a very bright future ahead of him and I’m positive that no matter what he decides to do in the future, his work ethic and ability is going to allow him to be successful.” said Medlin.

Making the 2017 season even more special was the fact that Neely was coming off a 2016 in which a shoulder injury sidelined him for a huge portion of the year. His comeback was complete and focused as he quietly had a monumental season. His parents Jeff and Donna Neely are on his side no matter what path he chooses to take.

“I think if he had the right offer from somewhere he would consider it. I think it’s just so soon after the end of the season and that he is just tired and has had so much on his mind with school and trying to get things completed to be able to graduate early,” Donna said. “Of course Jeff and I would love for him to play but we have told him it’s totally his decision and we will support him with whatever decision he makes.”

He has had a few offers from colleges but he is still waiting on the one offer that inspires him to continue to play football. No matter what he chooses to do his coach and parents will be behind him and Claiborne Bulldogs fans will always remember his efforts on the gridiron.