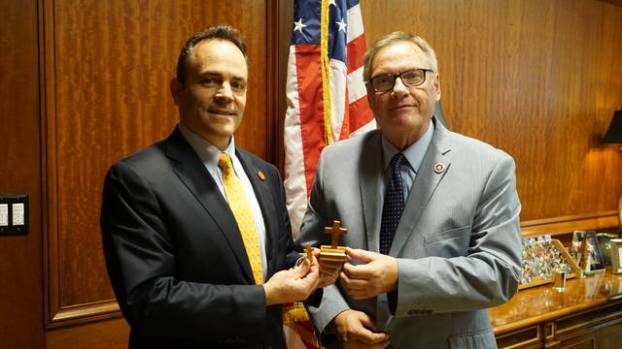 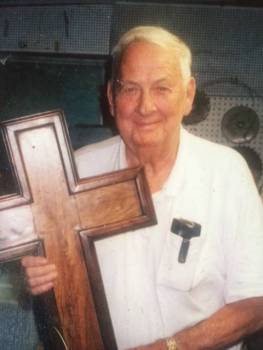 When Rep. Rick Nelson first took the oath to serve the people of the 87th House District of Kentucky, he also made a promise to the late Roy Stapleton.

Nelson promised his friend that he would present every Kentucky governor who Nelson served under with a wooden cross handmade by Stapleton. He kept that promise this week when he presented two of the crosses – a pin and a free-standing cross – to Governor Matt Bevin.

“Roy asked me to give out a cross to every governor I served under and, as of today, I have fulfilled my promise to him,” said Nelson.

Stapleton was a World War II veteran, coal industry retiree and devout Christian who made nearly 30,000 wooden crosses before he passed away in 2016. Only some of the crosses were taken to Frankfort; others made their way to Haiti on mission trips or were supplied to the Billy Graham Foundation. Many were handed out right in Stapleton’s own community of Middlesboro.

Stapleton’s family said he handed out at least one of his wooden crosses every single day in the last years of his life.

“He was a good friend and had a very fine ministry,” said Nelson.

Nelson said he plans to help continue his friend’s ministry, both before and after he leaves Frankfort later this year. Plans are already made for Nelson to hand deliver two of the crosses to Lt. Governor Jenean Hampton sometime this session.

Back in Middlesboro, Stapleton’s family say they hope “that his legacy will continue through his crosses that he made by hand.”