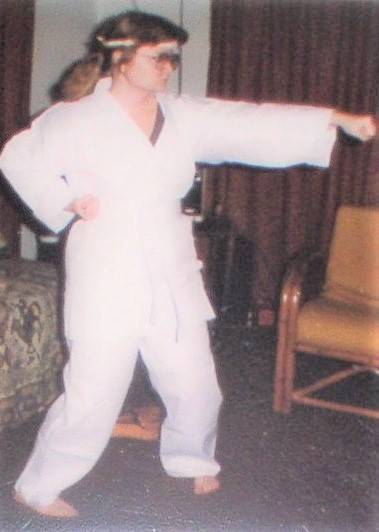 Staff writer Jan Runions practicing some beginner moves as a novice in Shotokan karate at home in St. Petersburg, Florida, in 1982, at age 27.

Jan Runions knows what it takes to get information out to the community in a timely and precise manner.

She has been with the Claiborne Progress on and off for 21 years and has served in various capacities, including assistant editor from 2001-2004. She has some experience with other area newspapers as well.

Her other experience includes a time as manager at the CEASE Shelter. Runions has been a writer and performer of folk music and has even performed at various state and federal parks in Tennessee and Kentucky, where her self-produced music was also available for purchase.

During her 20s and 30s she developed a love for the martial arts and earned a brown belt in Shotokan Karate before moving into Wing Chun Kung Fu (south China discipline), where she earned her first duan (degree) black belt.

She now serves as a reporter for the Claiborne Progress, and said about the community she loves to serve, “I guess you can say that my first love is reporting, simply because it gives me the opportunity to give back to the community. Without the local newspaper, there is no outlet for residents to learn what county government is doing, whose neighbors are achieving major success and who is ‘in trouble.’ There’s only so much regional news outlets can report, due to time and space constraints. We, on the local level, give the readers the in-depth story because information is power.”

Runions strives to make the community better by giving out information on topics that concern our society. She strives to be fair and accurate to all involved. She truly is a voice for the people in a community where its people are often forgotten.

Hanging up the apron, spatula