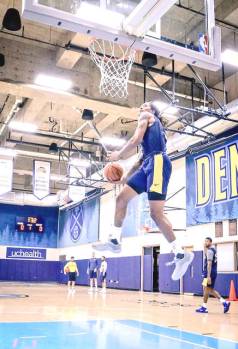 <p>Courtesy photos</p> <p>Emanuel Terry goes up for a dunk during a workout with the Denver Nuggets before the NBA Draft. The LMU standout will joining the Nuggets for minicamp and the NBA Summer League.</p> 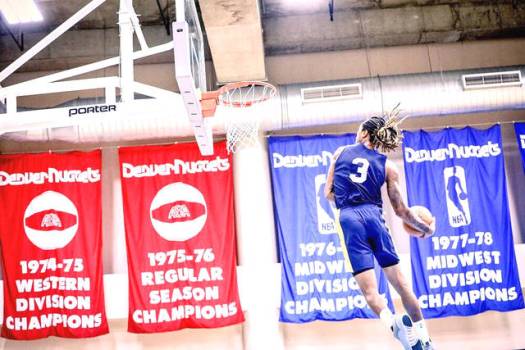 <p>Emanuel Terry soars through the air during a workout with the Nuggets.</p>

If there was ever a player to prove you can make it to the NBA from an NCAA D-II school, it’s Emanuel Terry. The former Lincoln Memorial University All-American forward recently announced that he will be joining the Denver Nuggets for minicamp and the NBA Summer League at the MGM Resorts.

Terry said he didn’t imagine he would land an opportunity with an NBA team when he decided to take his talents to Harrogate, Tennessee four years ago.

“My dream has always been to play at the highest level possible no matter how I got there,” said Terry. “I decided to commit my time to LMU (and) took what the coaches gave me and my teammates. I just grinded my way out and then, by the grace of God, I finally got a chance. I have a great agent, and he kind of put me in a position to perform in front of these people.”

Terry found out he would be joining the Nuggets the Monday after the NBA Draft.

“I waited that whole weekend to see what would happen. I didn’t get down or anything like that, I just waited and kept my faith up,” said Terry. “Eventually, my agent called me and told me that the Nuggets wanted to bring me in.”

Terry wasn’t short on opportunities following his pre-draft workouts. After he was notified that Denver wanted him to join their minicamp, the Brooklyn Nets called and said they wanted him on their team. The LMU forward also worked out for several teams prior to the NBA Draft including the Detroit Pistons, the Nets, the Nuggets and the Utah Jazz.

Terry doesn’t let the success he had during the pre-draft process get to his head. He is entering minicamp with a chip on his shoulder.

“Not many people know who I am. I’ve got to show them who I have to be, who I want to be,” said Terry. “I really feel like I can play at the highest level. I want the world to know who I am. I willing to do whatever to get there.

“Any time I ever went up against guys that slept on me or didn’t believe I could hang with them, I proved myself. That’s from pro-am (or) any type of league I’ve ever been in. I walk in with a chip on my shoulder. High level competition brings the best out of me. I feel like it’s going to help me in this summer league. I feel like I’m going to do really well in it.”

Terry said he received a text from Denver’s scouting director Jim Clibanoff saying he was on their NBA radar now.

“I’ve got to go in and show them…Emanuel Terry is the hardest worker, and that’s what I plan on doing,” said Terry.

Terry was also a consensus All-American from the D2CCA, DII Bulletin, Basketball Times and the NABC. The LMU standout averaged 16.9 points, 10.3 rebounds and 2.2 blocks per game. He shot the ball at a 71 percent clip from the field and 70 percent from the free-throw line.

“I knew that my teammates and my coaches would bring the best out of me,” said Terry. “My freshman year, I had to get my feet wet (and) learn everything, sit back, pay attention and progress over time. My sophomore year, I played a better role (and) we reached the national championship.

“My junior year, I got hurt — fractured my foot. I had to sit back and really open my eyes. When I got back healthy, I got back in it. My senior year, I just really put my faith in the Lord. My dad past away too, so it was like he was with me along the way. I prayed many days and many nights for me to have this opportunity to play and showcase myself against high level competition, players and NBA teams.

“As a senior, I just knew — any time I step on the floor —that if I didn’t do my job I felt like my team as a whole wouldn’t excel the way we did. That’s what I try to do every night. Luckily, all the accolades came. I give credit to my teammates, my coaches, my supporters, my mom and my family of course. Things worked out for the best.”

According to LMU Athletics, Denver will play three summer league games before the tournament begins on July 11. The tournament championship will take place on July 17. The Nuggets will square off against Minnesota at 11 p.m. on July 6. On July 7, they will battle Boston at 11 p.m. Both of those games will be broadcast on NBA TV.

The third game will take place at 9 p.m. on July 9 against Milwaukee. That game will be broadcast on ESPNU.