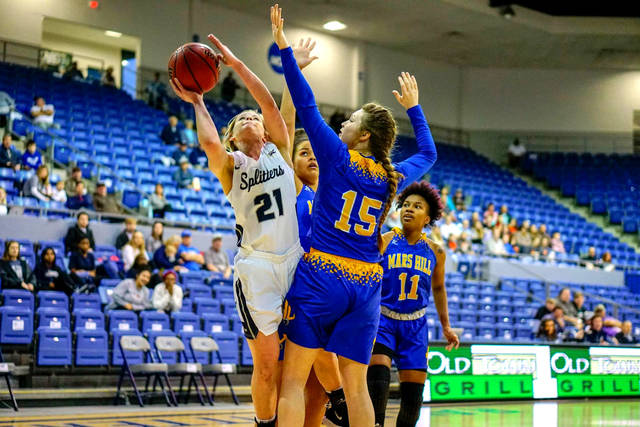 Emily Griffith joined the 1,000 point club during LMU’s loss to Lenoir-Rhyne on Saturday.

HICKORY, N.C. — They say basketball can be a game of inches. After a hard-fought back-and-forth affair, LMU had the ball with less than 20 seconds left in the hands of one of the team’s top scorers when she was called for barely stepping along the end line.

The loss spoiled not only LMU’s (15-13, 10-10 South Atlantic Conference) chances to host a quarterfinal game in next week’s SAC Tournament, it also spoiled a milestone for LMU senior Emily Griffith as she became the 20th member of the 1,000 point club earlier in the game.

She hit the millennial mark with 4:32 to go in the third quarter as she took a pass from freshman teammate Jordan Maney while cutting into the paint, pulled up just inside the free-throw line and hit nothing but net.

The senior from Oliver Springs had a nice all-around day as well, leading LMU in scoring (18 points), rebounding (eight) and assists (4). Her twin sister Rachel chipped in 13 points, while fellow senior Dasia Maxwell had seven rebounds and a block in her final regular season game.

LMU won the shooting and rebounding battle, out-shooting the Bears 33.9 percent to 31.3 percent from the field and winning the battle of the boards 44-40. They did commit 16 turnovers to nine by Lenoir-Rhyne.

Maxwell put LMU on the scoreboard right out of the gate as Emily Griffith corralled the opening jump ball and passed it to Maxwell in the corner for a long 3-pointer. The Bears then went on a 9-0 run sparked by a three from Toineeta to claim a 9-3 lead.

They extended it to eight points late in the quarter before baskets by Emily Griffith and a 3-pointer from SAC three-point leader Lindsay Proffitt cut the lead to 13-12 at the end of the first quarter.

The Lady Railsplitters were never able to get closer than 21-20 over the rest of the first half as the Bears held on to the slim 28-25 lead at the half.

LMU came out in the third quarter to claim an early 31-20 lead and the two teams essentially traded baskets over the rest of the stanza, ending up tied at 41-41 heading into the final period.

The Bears took the lead early in the fourth quarter, only to see LMU tie it up. This pattern repeated several times over the next few minutes, with LMU claiming a one-point lead twice. The last time was on a 3-pointer by Emily Griffith that gave the Lady Railsplitters a 55-54 lead with 1:28 remaining.

L-R senior Madi Suddreth hit a short jumper on the next Bear possession to reclaim the lead with 1:20 left in the game.

On LMU’s next possession, Sydney Duggins drove in for what looked like an easy shot, but L-R’s Karlie Bearden came out of nowhere and blocked it out of bounds. LMU was fouled on the next possession but missed both free throws.

Suddreth attempted a shot as the shot clock expired that was rebounded by Duggins. LMU drove down and got the ball to Rachel Griffith, who attempted to drive along the baseline but when bumped by a defender was called for stepping on the line.

LMU was forced to foul Toineeta, who hit both to seal the 58-55 win.

Madeline Hardy came off the bench to lead Lenoir-Rhyne (16-12, 11-9 SAC) with 14 points and eight rebounds. Suddreth scored 13 points in her final regular-season home game and Kennedy Weigt chipped in 10 points.

LMU is the sixth seed in the SAC Tournament and will travel to third seed Carson-Newman next Wednesday for a 7 p.m. tip-off. The winner advances to the semifinal round, which will be held in Furman University’s Timmons Arena in Greenville, South Carolina.

Statewide deer harvest numbers down in 2018