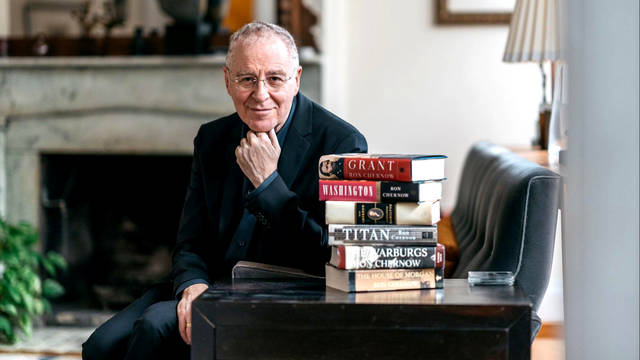 The Lincoln Memorial University Duncan School of Law (LMU Law) and the East Tennessee Historical Society (ETHS) have joined forces to bring world-renowned historian and biographer Ron Chernow to Knoxville on May 7.

Knoxville, Tenn. — The Lincoln Memorial University Duncan School of Law (LMU Law) and the East Tennessee Historical Society (ETHS) have joined forces to bring world-renowned historian and biographer Ron Chernow to Knoxville on May 7 as a part of The Sherri and Baxter Lee Distinguished Speaker Series.

Chernow, a Pulitzer Prize winning and New York Times-bestselling historian, has authored some of the most renowned and acclaimed biographies ever published. While nearly all of his seven books have earned praise, honors and awards, his 2004 portrait of founding father Alexander Hamilton inspired a worldwide phenomenon in the Broadway musical Hamilton.

The National Book Award winner illuminates the life and times of some of America’s most significant historical figures in his works. His community presentation is entitled Hamilton: The Man and The Musical. Chernow will be the featured speaker at the 2019 White House Correspondents’ Dinner on April 27.

Chernow’s first book, The House of Morgan, won the National Book Award as the best nonfiction book of 1990 and is considered a modern classic. His second book, The Warburgs, won the prestigious George S. Eccles Prize for best business book of 1993. He followed that up with a collection of essays, The Death of the Banker. In 1998, he published Titan, a biography of John D. Rockefeller, which stayed on The New York Times bestseller list for 16 weeks. Alexander Hamilton was published to extraordinary acclaim in 2004.

The book spent more than three months on The New York Times bestseller list and was the first recipient of the George Washington Book Prize for the year’s best book about the founding era. In 2010, Chernow’s long-awaited biography of George Washington, Washington: A Life, debuted to outstanding reviews. It would go on to win the New York Historical Society’s coveted American History Book Prize and the Pulitzer Prize in Biography. Chernow’s seventh book, Grant, was released to universal praise in 2017.

Beginning in 2008, Chernow collaborated with Lin-Manuel Miranda as the historical consultant on the sensational Broadway musical Hamilton. The musical is the biggest Broadway hit of the past 50 years. In May 2015, as a member of the show’s creative team, he received the Lucille Lortel Award for Outstanding Musical. The show was nominated for a record-breaking 16 Tony Awards, winning 11.

In November 2015, Chernow and Miranda jointly received the History Makers Award of the New York Historical Society for their work together on the acclaimed show and also were honored at the National Archives in Washington. That same month, Chernow’s biography of Alexander Hamilton returned to The New York Times bestseller list. It has sold more than two million copies, making it one of the best-selling biographies of all time.

Chernow is an honors graduate of Yale and Cambridge. He is one of the most distinguished commentators on history, politics and business in America today. He has won virtually every major prize in American letters. Former President Barack Obama conferred upon him a National Humanities Medal at the White House in 2015.

A frequent contributor to The New York Times and The Wall Street Journal, Chernow is a familiar figure on national radio and television shows and has appeared in numerous documentaries. He is the recipient of eight honorary doctorates and is a past president of PEN America, the main book writers organization.

Tickets for the community lecture will go on sale on March 15, 2019, at the Tennessee Theatre box office or online at www.tennesseetheatre.com. General admission tickets are $55. Students, East Tennessee Historical Society members and Friends of the Knox County Public Library will receive a code for discounted tickets. Patrons including KaTom, DeRoyal and Pilot/Flying J, as well as media partners including the Knoxville News Sentinel and WBIR make the presentation possible.