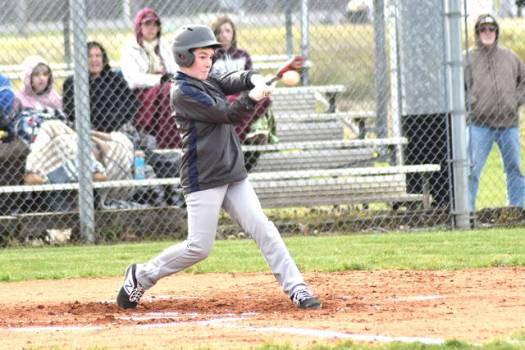 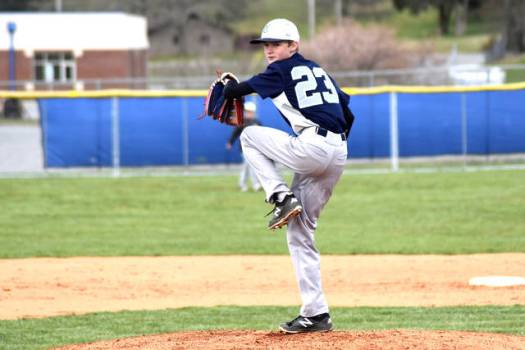 <p>Allen Earl | Claiborne Progress</p> <p>Evan Thomas got out of a bases-loaded jam giving up only one run.</p> 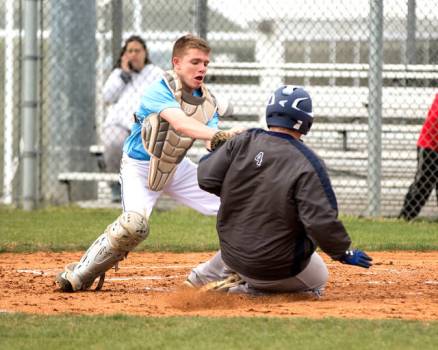 <p>Photo by Kim Barnett</p> <p>A close play at home between the Bulldogs and the Panthers.</p>

Evan Thomas faced adversity on the mound by walking with bases loaded and walking in a run before settling down and striking out the side. Pineville held a 1-0 lead when the Bulldogs had their first shot at the plate.

Dylan Foster drew a walk and then stole second and eventually found home on a fielder’s choice tying the game. Joseph Houser hit an RBI single making the score 2-1 Bulldogs. They manufactured a run with smart running on the base pads making the score 3-1. The first inning ended with the Bulldogs leading 3-1.

Pineville then singled in their second run with two outs and got closer to the home team, 3-2. They followed with a fielder’s choice that tied the game at three. The bases were again loaded with one out, and the Bulldogs went with Houser on the mound. After a strikeout for the second out, Claiborne allowed a run to cross the plate making it 4-3 but struck out a Pineville hitter for the third out.

Down 4-3, the Bulldogs needed to respond. Dalton Long began the bottom of the second with a deep double. Jackson Moyers then hit an RBI double tying the game at four before Foster singled in the fifth run. Houser then hit a two run triple that increased the Bulldogs lead to 7-4.

Claiborne scored again on a passed ball making the score 8-4. Conner Atkins then hit an RBI double increasing the lead to 9-4. Brady Hamlin singled to place two on base, and Eli Poore reached base on a Pineville throwing error that also allowed two more Bulldogs to cross the plate making the score 11-4.

Another passed ball scored Poore and then Moyers singled. Moments later, Thomas had an RBI single and Tyler Myatt hit a two-run single that pushed the Bulldogs lead out to 15-4.

Pineville wasn’t quite done scoring. Their combined efforts and Bulldogs mistakes allowed them to score four runs during their half of the third. After three and a half innings the score was 15-8.

In the Bulldogs bottom of the third, Hamlin hit a stand up double to lead off. Poore then drew a base on balls with one out. Claiborne hit an infield fly for the second out with the bases loaded. A two-run single by Thomas made it 18-8.

During Pineville’s top of the fourth, Claiborne again walked the bases full and then allowed one run making the score 18-9.

Claiborne wanted to end this game via the run rule and were able to do just that and secure a 19-9 victory. With the loss, Pineville moved to 3-2 on the season and the Bulldogs improved to 3-2 in regular season play.

Following the game Bulldogs head coach Jason Wampner said this to his team, “We had some good pitching, and I tried to save some pitches tonight so you can throw against Cumberland Gap tomorrow. We hit good at times, but we all know that we need to do better running the bases.”

The Bulldogs next game was against rival Cumberland Gap over in Panther land, and they won it by the final score of 15-4.