Railsplitters in fourth after round one of SAC Championship 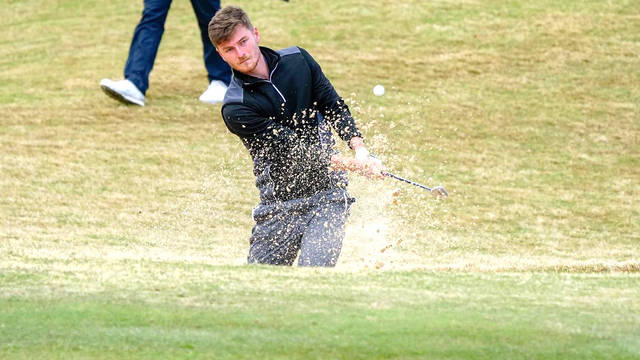 Sam Broadhurst shot a 71 during the first round of the SAC Golf Championships. The team currently sits in fourth.

CAMDEN, S.C. — The Lincoln Memorial men’s golf team is 13 shots off the pace at the 2019 South Atlantic Conference Championship after opening play with an 11-over par 291 on Sunday at Camden Country Club.

Newberry was the only team to finish under par in the opening round with a two-under par 278. That number is six shots better than second-place Coker, who shot a four-over par 284. Queens is in third place at seven-over par, while Tusculum is in fifth place at 13-over par.

Three players are in the top 12 for the Railsplitters. SAC Player of the Year Sam Broadhurst rolled in three birdies to post a one-over par 71, which is good for a share of ninth place, while Dan Bradbury and Luke Harries carded two-over par 72s to sit in a tie for 12th. Bradbury led Lincoln Memorial with four birdies, while Harries was one of four players in the field to make an eagle in the round.

Harry Boyle and Hamish McColm finished out the round for the Railsplitters with six-over par 76s to hold a spot in 31st place.

Newberry’s Harry Bolton is leading the way individually following a four-under par 66, while Newberry Adrian Villiger and Queens’ Henry Bryden are tied for second at two-under par. A collection of four players shot one-under par to hold a share of fourth place.