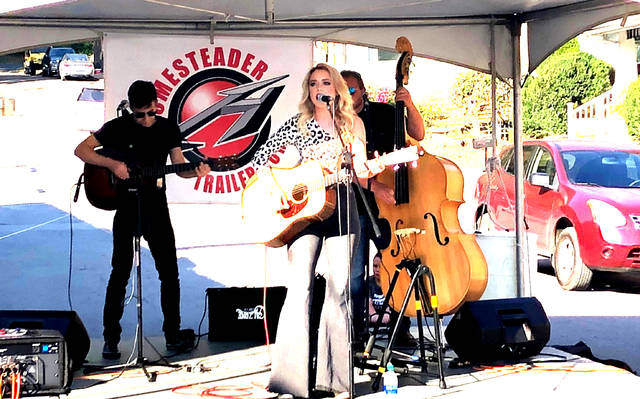 Emily Roberts, season nine runner up on NBC’s The Voice, performed before a record number of visitors to the 2019 White Lightning Trail Festival on Saturday.

The 2019 White Lightning Trail Festival boasted one of the largest crowds the festival has seen with a record number of visitors to Cumberland Gap for the ninth annual event.

“This is one of the largest crowds we have seen,” Karyn Clark, CEO of Claiborne Economic Partnership. “We are so excited to have Emily Ann Roberts performing for us and all of the community putting their support behind the festival.”

The White Lightning Trail Festival was named one of the Top 20 Events in the Southeast by the Southeast Tourism Society and celebrated its ninth year in the community Saturday.

Closing out the festival this year was season nine runner up on The Voice, Emily Ann Roberts.

“It’s been a crazy journey,” Roberts said of competing on The Voice three years ago. “The Voice completely changed my life, and I never knew when I went to audition for it really and truly how it would change my life forever.”

Roberts explained that The Voice actually found her on YouTube singing Carrie Underwood’s “Something in the Water.”

“They invited me to come for a callback audition,” she said. “I went and auditioned and one thing led to another, and I came in second place and went back home to Knoxville and everything was different.”

The Knoxville, Tenn. native competed on Team Blake (Shelton) and squared up on the stage against Harlan County’s own Jordan Smith, who competed on Team Adam (Levine) in the 2015 season. Roberts was runner-up that year against Smith and her career took off.

“People recognized me when I went out places, and I was able to start playing and doing music full-time,” she explained. “It meant the world to me because it was what I always dreamed of doing.”

After the show, she returned to school and graduated in May before heading off to Nashville.

“I graduated high school and started working full-time in Nashville writing songs and recording my music,” Roberts said of her experience following The Voice. “I’ve just been working on that for really three years and co-writing and really just digging in and figuring out what I want to say and how I want my music to sound.”

In May, Roberts appeared on The Voice stage again to perform her latest single “Someday Dream.”

“I finally released my first little body of work in July,” she said. “I released my “Someday Dream” EP, and it’s just been a blast being able to play those songs.”

Roberts is excited to finally be moving to Nashville full-time. She’s been traveling back and forth from Knoxville to Nashville, but in October will finally celebrate being a full-time resident of Music City.

She explained that performing and songwriting are special to her but performing is her truest passion.

“I love performing,” she said. “Songwriting is fun for me but it feels sometimes a little bit more like work, and I think it’s just because I’m so hard on myself and hard on my songs. When I’m performing I’m able to just be in the moment and I’m not worried about anything. I just get lost in the music and it’s just my passion. I love songwriting, don’t get me wrong, but performing is definitely my main passion.”

Clark said she was so excited to have Roberts there to close out the 2019 festival.

“We took an online poll to see who the community wanted to headline the event,” she said. “Roberts won by a landslide. I reached out to her booking agency and invited her to come out.”

Roberts had never been to Cumberland Gap before so this was a first time experience for her.

“This is my first time here,” she said. “It’s just so nice here. The Bed and Breakfast is so precious and everybody has been so sweet to us and treated us so sweet. We want to stay a little bit longer, it’s been so nice. I love being able to play in Tennessee. I’m a Knoxville girl, so anytime I get to play anywhere in Tennessee it means the world to me.”

The crowd enjoyed a fun concert filled with country music, Roberts’ new songs, and cover songs she performed on The Voice.

For the first time ever this year the festival included tethered hot air balloon rides. The tradition of the cruise-in car show, the 5K run with Servolution and LMU’s Physician Assistant Program, performances by local cheer and dance teams, and a cornhole tournament also continued this year. Servolution also hosted a Duck Derby along with a dog parade with LMU’s Veterinary School.