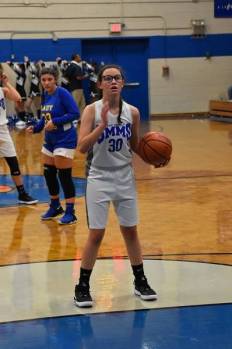 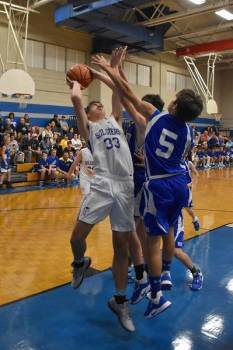 <p>Allen Earl | Claiborne Progress</p> <p>Ethan Cupp goes up for a contested layup. He played great and led SMMS with 12 points</p>

Directly following the conclusion of the two junior varsity games on Oct. 22, the girls game tipped off varsity play. Hancock started off quickly and rolled out to a 5-2 lead. SMMS fought back and by the start of the second period were down by only one at 11-9. The Lady Blue Devils lost ground during the second period and were down by seven at the half, 21-14.

SMMS rallied and had the score down to one point at the start of the final period.

Down 27-26, SMMS was now working with momentum and at 4:51 had a one point lead. A technical foul against the Hancock coach helped the Lady Devils get out front by four points.

Hancock had one run left, but they fell short by the final score of 38-32. Leading SMMS was Ily Bussell with 14, Allie Jones with 13, Genesis Bailey with six, Ereaunna Ford with three and Madison Ferguson with two points. Hancock was led by Harmony Skism with 14.

The final game of the night featured the Blue Devils varsity boys. Hancock wasn’t as tall giving the home team a bit of an edge. The first period came and went in a flash but not before SMMS pulled out to a 15-7 advantage.

It didn’t matter which five guys SMMS coach Todd Shackleford placed on the court, he got results. At the half, the score was 32-9. The third period also belonged to the Blue Devils as they pulled out to a 40-9 lead.

During the final period, it was evident that the lack of length had allowed SMMS to control the game. After the final buzzer, the home team had won big, 41-17. Leading SMMS was Ethan Cupp with 12. Isaiah Gerrells had eight, Vince Bolden and Aiden Mink had six each and Josh Bolton had four. Cayden Cox and Jaris Bunch finished the total with five combined. Shane Keck led Hancock with four points.