Teams advance to semifinal round at county JV basketball tournament 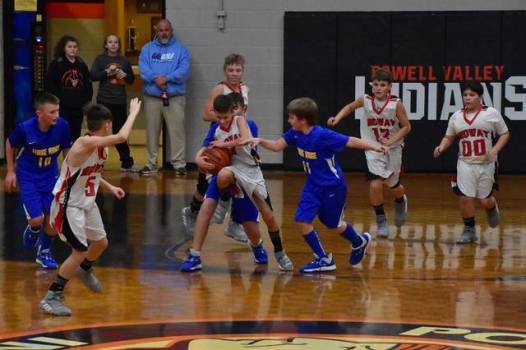 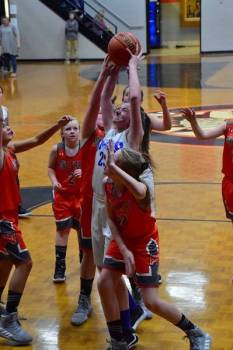 <p>SMMS used their length to get second chance points in the paint.</p> 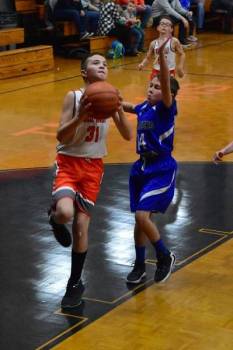 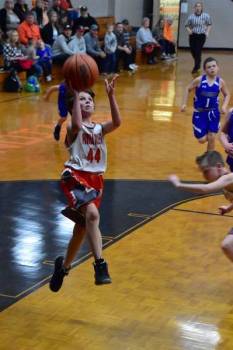 The second day of the 2019 Claiborne County junior varsity middle school tournament was delayed two days due to cold and snowy weather, and the kids were eager to take the court on Dec. 12 with Powell Valley Middle School remaining as host.

The first game of day two featured the boys teams of Midway and Forge Ridge. The Dragons opened up the game with a 3-pointer, and then rolled out to a 7-0 lead going into the second period. The Red Devils were trying to get a basket but were struggling to get a good look.

During the second, the Dragons continued to pull away. At the end of the first half, the Dragons led 15-0. Midway finally got on the scoreboard with around two minutes showing on the third-period clock, but the Dragons were still in control.

Forge Ridge finished the period leading 17-5. The Dragons found their momentum again during the final period and secured the 27-7 victory. Leading Forge Ridge in scoring was Gavin Bailey with eight. Cole Adams and Gavin Surber both had six, Gabriel Adams had five and Austin Michael had two. Leading Midway was Kaden Williams with three, Noah Burke and Dizel Ford both had two points each.

The second game of day two featured the host Powell Valley versus Soldiers Memorial Middle School in a girls game. These two teams played hard to start the game. The Lady Indians dropped in the first basket and a couple minutes later SMMS tied the game.

SMMS took the lead with under a minute left in the first period and led going into the second period. SMMS took control during the second, in part by using rebounding and second chance points. The Lady Blue Devils defensive pressure let their offense lay in several points. SMMS led at the half, 13-6.

The Lady Indians took the momentum away from SMMS during the third period and had the score down to two points before the Lady Blue Devils got two much needed baskets late to stay ahead. Going into the final period the score was 18-10.

The Lady Blue Devils withstood one last run from the Lady Indians and won by the final score of 18-12. Jaylen Pressnell led SMMS with nine, Haylie Gilbert had five and Jossilyn Robbins had four. Leading Powell Valley was Zoey Nelson with six, Mahala Walker had four and Melayne Rose had two points.

The final game of day two featured Powell Valley and SMMS in a boys game. It was evident early on that the Indians wanted to run and they got the first basket. The Blue Devils ran their offense with patience and captured the lead. SMMS led by one going into the second period, 7-6.

The second period was good for the host team as the Indians took charge and pulled out to a 20-8 lead. Powell Valley extended their lead to 27-10 during the third and needed only to not collapse during the final period. The Indians stayed focused and won the game, 36-13.

Leading the Indians in scoring was Kolton Goins and Gavin Figueria with 17. Cole Weaver also dropped in two points. SMMS was led by Kaden Loven was six, Jaden Myers had three and Tyler Evans had two.

Semifinal rounds were scheduled for Dec. 13 with game one tipping off at 5 p.m.