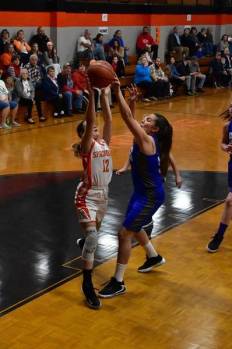 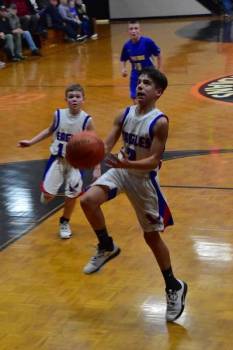 <p>Jed Bailey led Livesay and shot the ball well inside and out.</p> 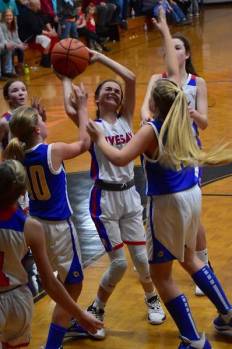 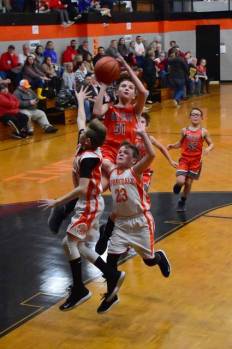 <p>Kolton Goins was nearly unstoppable as he led the Indians to the championship game.</p>

Springdale put three points on the board quickly and increased their lead out to 13-0 after one period. The Lady Owls used the second to run out to a big 24-5 advantage at the half. The third period was mostly the Lady Owls adding to their total. After three periods Springdale led 32-5.

The game went to Springdale, 32-12. Leading Springdale in scoring was Hope Cole with 10, Jacey Ferguson had eight, Chloe Cupp and Graci Cupp had six each, and Olivia Rowland and Avalynn Cupp had one apiece. SMMS was led by Jossilyn Robbins with nine and Haylie Gilbert with two. The Lady Owls advanced to the championship game.

The No.1 boys seed H.Y. Livesay and Forge Ridge were next on the court. From the opening tip, it was evident that H.Y. was going to trap on defense and look inside for their points. H.Y. opened with a 6-0 run, but the Dragons scored six unanswered. At the end of the first period the Eagles led 8-6.

During the second period, Forge Ridge did a good job keeping H.Y. off the scoreboard but they too were struggling to find the basket. At 1:53, they had found a way to tie the Eagles at 10. At the halftime break, the score was still tied at 10.

The Eagles opened up the second half going inside and also hitting from outside to lead by four points. The Dragons lost pace and by the end of the third period were down 22-13. The Dragons continued fighting during the fourth period but wasn’t cutting into the Eagles’ lead.

In the end, the Eagles advanced to the championship by the final score of 28-13. Leading H.Y. in scoring was Jed Bailey with 13. Jonathan Wilder had five, Cole Carter had four and three others had two each including Keaton Clawson, Neil Bunch and Layton Hinckley. Gabriel Daniels led Forge Ridge with five and two others both recorded four points, Gavin Surber and Cole Adams.

The Lady Dragons and Lady Eagles of Livesay took the court next. Forge Ridge once again only dressed five players and had their work cut out for them. H.Y. took an early lead, but Forge Ridge went ahead at the 3:48 mark by one point at 4-3. The Lady Eagles quickly resumed leading and ended the first with a three-point advantage, 8-5. The Eagles started pulling away during the second and led at the half, 24-9.

Brinkley Hollin led H.Y. with 15, Jayla Bailey had eight, Jenna Middleton had seven, and three others dropped in two points each including Izzie Helton, Jaylee Hayes and Abby Peters. Navaeh Allen led Forge Ridge with 15, Kaydence Daniels had two and Makensiee Brooks had one point.

The final semifinal game belonged to the Owls of Springdale and the hosting Indians of Powell Valley. Scoring in this game started slowly but picked up towards the end of the first. Going into the second period, the Indians led 12-6. Powell Valley used the second to make a serious run. They were better on fast breaks and moved out to a 20-9 halftime lead.

Coming out of the break, the Owls were a different team. Defensively they were all in the passing lanes and a few turnovers got them right back into the game, behind only seven, 20-13. The Indians returned the favor by making a run of their own and at the end of three periods led 30-20.

During the final period, Powell Valley had just enough offense to hold off the Owls and secured their spot in the championship game. The final score was 35-22.

Leading the Indians was Kolton Goins with 25, Gavin Figueria had six and Hunter Ellison had one point. Springdale was led by Charlie Robinette with eight, Owen Medlin and Robbie Buchanan had four, Drew Epperson had three, Colton Jones had two and Blake Gilbert had one point.

Dec. 14 will be the championship and consolation games.