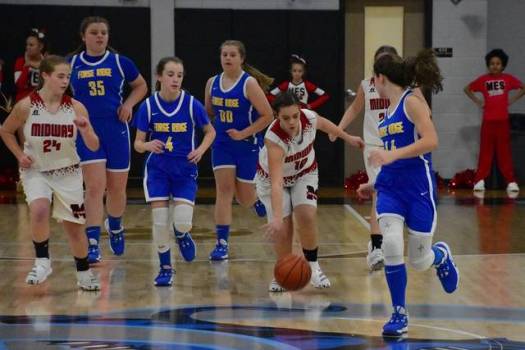 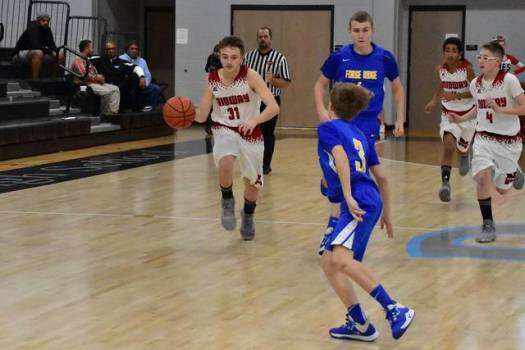 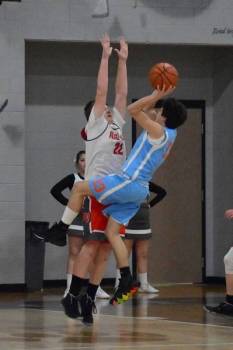 <p>Nick Marlow tries to get a shot over Powell Valley’s Kaleb Powers.</p> 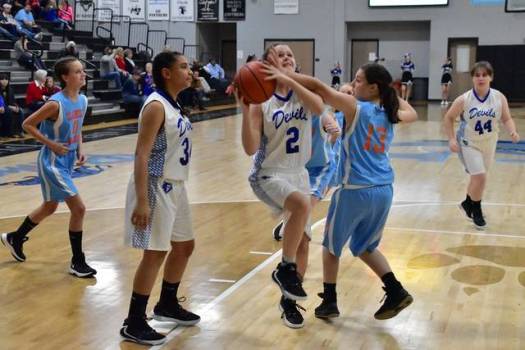 The Lady Red Devils were the fourth-seeded team and the Lady Dragons were the five seed. After the tip, Forge Ridge dropped in four points to lead 4-2 after one period of play. Midway scored six unanswered and took the lead, but back-to-back threes had the Lady Dragons on top again at 10-8 in just seconds. Midway rallied back in part to free throws and took a 12-10 lead going into halftime.

Midway kept scoring and led 16-12 with three minutes left in the third. The Lady Red Devils went into the final period with a six-point advantage, 20-14.

At the 3:39 mark, a technical foul was called on the Midway coach for questioning a call, but it didn’t hurt her team as far as points. Midway came down the court and hit a huge three that allowed them to lead 23-18 with a minute left in the game.

The Lady Red Devils took the win, 23-18. Abby Hardy led Midway with eight points and Lily Rosson had six. Tiara Warwick had five and Izabella Cosby had four. Chloe Daniels and Nevaeh Allen both had eight points for the Lady Dragons and Emily Marcum had two.

The same two schools met in the boys game next, and Forge Ridge hit a three to open the game but Midway used defense to get easy baskets and take the lead 7-3. Midway kept putting the ball in the hoop and led 13-3 nearing the end of the first.

The Red Devils defense stepped it up even more and allowed them more easy baskets. At the end of the first, Midway led 22-3. During the second period, it was more of the same. Midway never allowed the Dragons to settle in and at the half led 30-3.

Forge Ridge scored their only points during the third as the score was 30-6 going into the final period. On this night, Midway was just better and won the game 33-6. Leading Midway in scoring was Jake Smith with 14, Korbin Hatfield had 12, Cole Holt had four, Tyler Epperson had two and Kaden Williams had one point. Isaac Brown led the Dragons with five and Jacob Surber had one point.

The third game belonged to the girls of Soldiers Memorial Middle School and Clairfield. SMMS started strong and had the Lady Eagles scoreless until the last seconds of the first period. Clairfield hit a three, making the score 14-3. During the second, Clairfield was hanging right there, but it was slipping away. By halftime, SMMS led 17-8.

SMMS was led by Genesis Bailey with 12, Allie Jones had 10, Madison Ferguson had four, and Emma Worley had three. Ily Bussell, Carley Hall, Preslee Delph and Gracie Eldridge had two each. Ereaunna Ford finished with one point.

Clairfield was led by Sarah Gibson with nine. Madison Hicks had three. Chloe Miracle and Brylee Taylor had two each.

The final game of day one featured the Powell Valley Indians against the Clairfield Eagles in boys competition. Clairfield kept pace with the Indians for the better part of the first but started losing ground. The first period ended 12-6.

Powell Valley wanted to move away from Clairfield during the second period, and they got the job done. At the half, the Indians led 29-8. The third period was a fast one as the Indians increased their lead to 31-10. During the final period, there was little doubt the Indians were advancing but the Powell Valley coaching staff wanted their team to look sharp and play solid.

The game ended 37-12. Leading Powell Valley was Kaleb Powers with eight. Kolton Goins, Trent Jenkins and Cody Weaver had five each. Jonah Ellison and Andy Osbornee both had four. Michael Boring had two and Hunter Wilhoit had one point.

Clairfield was led by Nate Marlow with 10 and Bryson Ballard had two.

The winners all advanced to the second round of the tournament, which began on Dec. 17.