Lady Senators use Shultz last-second dagger to down No. 15 Catawba Valley 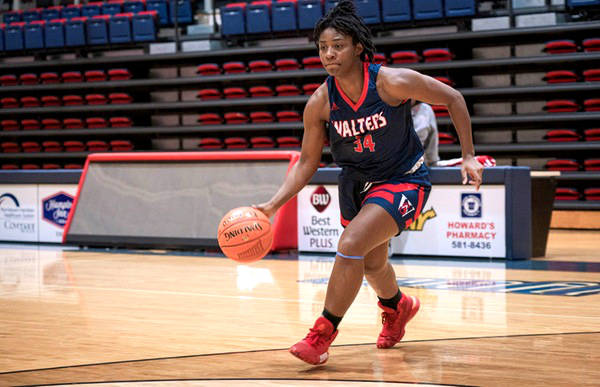 Jamya Rogers led Walter State with 17 points and 11 rebounds in their last-second victory over Catawba Valley.

MORRISTOWN, Tenn. — With time ticking away in the extra period and the game tied, Walters State coach Dave Kragel called a play to get freshman guard Blayre Shultz open for a three.

The Lady Senators ran it to perfection and, unguarded at the top of the arc, Shultz drained the three-pointer with 12 seconds to go, giving WSCC a 66-63 overtime victory over NJCAA Division II No. 15-ranked Catawba Valley Tuesday night at ‘Z’ Buda Gymnasium.

It was a nerve-wracking moment, but one Kragel trusted his team to execute as he decided to keep his last time out in his pocket in case Shultz missed. He never needed it.

“That was a great shot to end the ballgame,” Kragel said. “We ran a special play for her. We’d run a special play for (Jamya) Rogers to get her the ball the time before. I didn’t want to call a time out because we only had one left. We had to hold it in case they scored so we could move it up and get a shot.”

The game wasn’t over, even with the pressure on the Red Hawks (8-1) who came into WSCC’s gym undefeated. With 12 seconds left, Catawba Valley called a timeout at the five second mark and drew up their own attempt to score. With the Lady Senators (9-4) clogging the lanes, Catawba Valley’s Aniya Taylor put up a three-point prayer, only to see it bank off the rim.

“Once Blayre hit the shot, we had two fouls to give,” Kragle said. “So we weren’t going to let them shoot the ball. We were at least going to force them to do something from way downtown.”

It was a dramatic ending to a game that appeared to be slipping away from Walters State after the opening quarter. The Lady senators charged out to a 17-10 lead in the first frame, but continual turnovers and poor rebounding in the second helped the Red Hawks take a 29-25 lead into the locker room at halftime.

“We made some really silly mistakes, throwing the ball at people and not running the offense,” Kragel said. “I don’t have an answer for it right now.”

The half break was all WSCC needed to get its offense cleaned up. Rogers hit a layup 18 seconds into the third and Shultz buried a three to pull within one. A jumper from Paris Mullins would give the Lady Senators back the lead not even two minutes into the second half.

Mullins tapped in a layup a minute later to cap an 11-3 Walters State run.

WSCC kept a cushion for the rest of the third, with a three from Alexis Trice with five seconds to go securing a seven-point advantage heading into the final period.

The Red Hawks continued to hang around, scrapping their way within three points on a Makayla Weaver layup with 4:39 to go. Alliya Chaplin banked in a layup with a little over three minutes on the clock to pull within one before a Weaver layup gave Catawba Valley a 56-55 the lead with 2:25 left in the game.

Kiera Hill drew a foul with 38 seconds to go and after missing her first free throw, drained the second to tie the game 56-56.

The Red Hawks attempted to run out the clock and set up a final, game-winning shot, but Taylor missed a jumper with three seconds to go and the game went to overtime.

Scoring was at a premium in the extra period as both defenses buckled down.

Weaver hit a three that game CVCC a 63-60 lead, but a free throw from Jalayah Manning kept the game within a jumper. With 51 seconds to go, Rogers tossed in a layup that knotted up the score, 63-63, setting up the final, cinematic shot from Shultz to deliver Kragel his 998th coaching victory.

“We’re lucky to win,” Kragel said. “It felt like we’d already gone home for Christmas after the Spartanburg (Methodist) game. In the first quarter, we played alright. In the second it was just like, ‘where are we?’ I’m tickled to death that we won the ballgame and I’m not looking forward to going over there and playing them on the second of January.”

Rogers finished with a double-double for the Lady Senators, putting in 17 points and grabbing 11 rebounds. Shultz contributed 15 points. Mullins had nine to go with six rebounds.

Tuesday’s victory puts WSCC coach Dave Kragel at 998 coaching wins, just two away from 1,000. Kragel reflected on that upcoming achievement after the game.

“All those have come because the players that have played for me buy into what we do,” Kragel said. “That’s the biggest factor. It’s not because of what I do. It’s because of the players and the assistant coaches that have helped us and helped this program over the course of 43 years. My biggest concern is to just win one game at a time.”