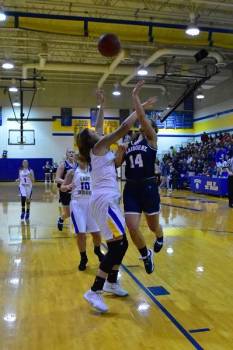 <p>Allen Earl | Claiborne Progress</p> <p>Macie Sumner led CHS in scoring, but she earned each basket with shots like this.</p> 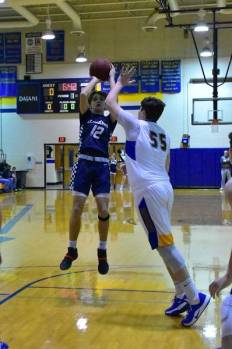 After two junior varsity were completed in Hancock County, Jan. 3, only the varsity games remained left to tip off. The first game was the varsity girls, and Claiborne came in fresh off the holiday vacation and were ready to play a meaningful game.

The two swapped baskets with Macie Sumner dropping in two plus a free throw only seconds later. Claiborne held a 3-2 lead, but they failed to pull away. Claiborne played well on the defensive end, but at the 2:09 mark they led by only three at 5-2.

Points following an intentional foul against the Lady Indians aided the Lady Bulldogs to a larger lead at the end of the one period, 11-2. Emma Beason was putting the points on the board from the free-throw line, inside the paint and from the field.

Kelsey Munsey worked hard in the paint and Kaylee Cox added pressure on the defensive end. Scoring slowed during the second, but Hailey Sexton added a basket at the 4:20 mark to keep Claiborne out in front. At the half, Claiborne led 24-10.

Trinity Jones scored the first CHS basket of the second period and Munsey battled hard for offensive boards and second chance points. Jones and Sumner added baskets and the Lady Bulldogs were taking control of the game once again. With three minutes remaining in the third, they led 34-17. At the end of three periods, Claiborne led 41-17.

During the fourth period, McKenzie Cowell and McKenzie Walker had some great minutes along with Hannah Fugate, Taylor Pressnell and Emma Myatt. The Lady Bulldogs pulled on out to take home a 54-22 victory.

Leading CHS in scoring was Sumner with 15. Beason, Sexton and Jones all had eight. Cowell had five. Walker, Skylar Cook, Emma Myatt, Munsey and Hannah Fugate had two each. Cox finished with one point. Payton Nicely led Hancock with eight.

Coach Ariel Nickell said this after the game, “I’m very pleased with how they played coming off the two-week break. We usually don’t play well being off this long, but tonight they were ready.”

The Bulldogs came into the boys game looking to start a new year off with a big road win, but taking one from Hancock County at their home is always a tough thing to do. Kade Beeler got the scoring started for Claiborne followed by two free throws from Evan Poore.

Isaac Thomas came off the bench and made an immediate impact with a basket. Then Evan Poore hit one down low to give the Bulldogs an 11-3 advantage causing the Indians coach Evan McCoy to call a time out. Beeler hit his sweet mid-range jumper over his defender, and then Blaine Caylor dropped in a 3-pointer to make it 16-4.

Thomas kept driving into the paint for big baskets but couldn’t make the free throws on the and-one chances. The visiting Bulldogs led by 15 after one period of play, 20-5.

Jacob Williams, Ethan Poore and Evan Poore hit three baskets, and the Bulldogs pulled out to a 20-point lead. The Bulldogs were getting points all over the lineup especially from Ethan Poore, who was driving the lane at will. Claiborne stayed out in front and led at the half, 33-17 after an Indian buzzer beating 3-pointer.

Ethan Poore hurt his ankle to start the third, but Beeler was there to pick up the scoring duties. CHS led by 22 with 5:30 showing. Daniel Atkins was quietly having a good game as well. Each time the Indians had a run, the Bulldogs had an answer.

With 1:13 left in the third, Claiborne had pulled it to their largest lead of the game at 27 points, 57-30. After the end of the third, CHS led 57-31 and some of the home crowd were making their way out of the gymnasium. Claiborne went to the bench heavy and for the most part they held their own during the final period. CHS secured the win at 71-54.

Beeler didn’t play much of the second period but still led the Bulldogs in scoring with 17. Thomas had 10. Evan Poore had nine, Ethan Poore had eight. Seth Morelock had five. Landen Wilson and Jacob Williams had four and Blaine Caylor finished with three. Hunter Hatfield led Hancock with 16 points.

Claiborne head coach Corey McGinnis had this to say following the win, “Anytime you leave here with a win it’s special. This is a hard place to play. They are well coached and have great athletes. I’m proud of the way our team played with it being the first game after the holidays. It was a great effort.”

Next on the schedule is an away game versus rival Cumberland Gap, Jan. 10.