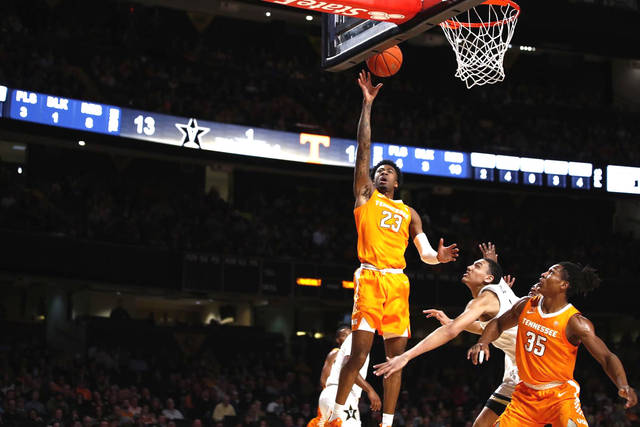 Jordan Bowden shoots a floater during Tennessee’s game against Vanderbilt on Saturday. The senior guard ended the night with 21 points.

NASHVILLE, Tenn. — A dominant defensive effort and a 21-5 run to begin the second half allowed the Tennessee basketball team to push past Vanderbilt, 66-45, Saturday inside Memorial Gym.

The result improved UT’s record to 11-6 overall and 3-2 in SEC play, while Vanderbilt fell to 8-9 overall and 0-4 in league action.

Senior Jordan Bowden led the Tennessee offense, finishing with 21 points while shooting 7-of-11 from the field and 7-of-8 from the foul line.

Juniors John Fulkerson and Yves Pons each added 12 points for the Vols.

Freshman Josiah-Jordan James also was tough on the boards for the Big Orange, grabbing a game-high nine rebounds. James also dished off a game-high five assists.

Both offenses started slow, with the squads shooting a combined 37 percent (7-of-19) from the field in the contest’s opening eight minutes, good for a 9-9 score line.

Shortly after the under-12 media timeout, Vanderbilt took a 13-11 lead. But over the next four minutes, the Vols locked down the Commodores defensively and used a 10-0 run to take a 21-13 lead with just more than six minutes remaining in the first half.

Vanderbilt responded to the Vols’ run with a 7-0 spurt of its own to close the opening half. However, UT held onto a slim 21-20 lead heading into the locker room.

Out of the break, Tennessee broke things open with a 10-0 run, during which eight points came inside the paint, to increase its lead to 31-20.

As the half wore on, the Vols continued to stretch their lead and their run to begin the second half, taking a 42-25 lead with 12:24 remaining in the contest.

During the game’s final 10 minutes, Tennessee continued to stifle the Vanderbilt offense while maintaining its efficient shooting mark on the other side of the floor, increasing its lead to as many as 22 points.

Le Streak Continues: Junior Yves Pons has now recorded at least one block in each of the Vols’ first 17 games, marking the longest streak since C.J. Black recorded a block in 18 consecutive games over portions of two seasons in 1998. Pons finished the night with four blocks and has recorded multiple blocks in each of Tennessee’s SEC contest this season.

As One Streak Continues, Another Concludes: The Vols held Vanderbilt to an 0-25 night from 3-point range. It was the first time since the 3-point shot was introduced in the 1986-87 season (spanning 1,080 games) that the Commodores failed to knock down at least one 3-point attempt.

Blackjack’s Night: Following the victory, redshirt junior Jacob Fleschman was informed by head coach Rick Barnes in the locker room that he was being placed on scholarship for the spring semester. Pandemonium ensued.

Up Next: The Vols return home Tuesday night to host Ole Miss at Thompson-Boling Arena. Tipoff is slated for 9 p.m. ET on SEC Network.