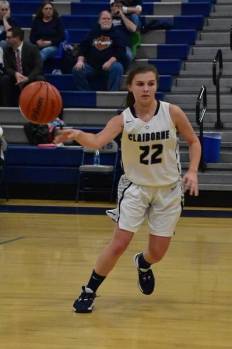 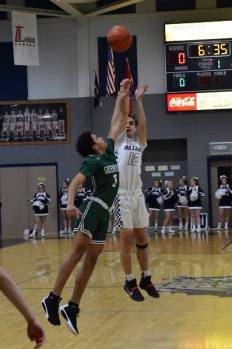 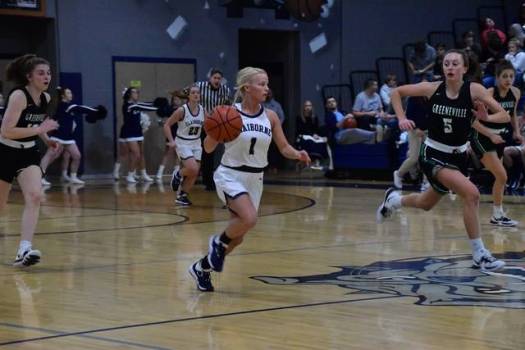 The Devils were unstoppable when the game began. They dropped in 14 and allowed Claiborne only three points at the middle of the period using defense as a catalyst for offense. At the end of the first period the Green Devils led 24-12. During the third, Claiborne slowed the Devils down a little in the early portion of the period but Greeneville still pulled away and led at the half, 35-17. Claiborne came out in the third and scored the first six points. They had the game down to nine points and at the end of three were down only 10 at 45-35. During the third Claiborne did not quit. The Lady Bulldogs had the Lady Devil’s lead down to seven and then five, then three at 47-44 with 3:42 remaining but never got closer and ended losing by the final score of 54-49. Leading Greeneville in scoring was Tambry Ellenburg with 25. Claiborne was led by Taylor Pressnell with a breakout game, she dropped in 22 points. Emma Myatt had 12, Mackenzie Cowell had eight, Nevaeh Cobb had three and Jordan Fultz along with Hailey Sexton both finished with two points each.

The varsity Lady Green Devils came into this one with a 9-11 overall record and were only playing with two seniors and no juniors. The team is talented and young but still a team that Claiborne needed to be able to defeat if they wanted to make the next step. Scoring was slow at first but the two teams started finding the rim and the visiting Lady Green Devils started pulling away ever so slowly. At the end of the first period the Devils led 18-8. During the second, Greeneville started putting together runs that left Claiborne behind. At the half Claiborne was still in the game but were down by nine points at 28-19. The Lady Green Devils made another run during the third period doing damage from the free throw line and behind the arc. Claiborne tried to keep pace but fell short. After three periods the score was 50-25. When the fourth period started it was Greeneville who kept the scoreboard changing. They went to the stripe several times consecutively and increased their lead point by point. With four minutes left the score was 53-27. Claiborne had no answer for the Lady Green Devils on this night and lost by the final score of 62-29. Lauren Bailey led Greeneville and all scorers with 30. Claiborne was led by Emma Beason with nine, Trinity Jones had six, Kelsy Munsey had five along with Hailey Sexton and Macie Sumner had four points.

The varsity boys game started off a low scoring contest. CHS got behind early and led at 6-5 then lost the lead; however, they tied it up by the end of the period, 9-9. The Green Devils played well as the second period got underway. They rolled out to a 19-14 lead around the five minute mark. Claiborne battled back and had the game tied until a last second three pointer by Greeneville gave them a three point halftime advantage, 27-24. Not surprisingly, the Devils ran off to a 40-27 lead during the first four minutes of the third and it seemed like Claiborne couldn’t get a break. The Bulldogs stayed within 10 points of the Devils and were down 49-39 going into the final period. Claiborne battled back but each time they made a run the Devils countered with one of their own. The Bulldogs had the lead down to six late but Greeneville slowly pulled out to a victory at 60-52. Greeneville was led by Kobi Gillespie with 22. Claiborne was led by Kade Beeler with 18 points 12 of them on three point baskets. Evan Poore also shot the three ball well making three of them and finishing with 11 points. Jacob Williams had eight points, Daniel Atkins played ferociously and was constantly being knocked to the floor. Atkins had six hard earned points. Ethan Poore also had six and Blaine Caylor finished with three points.

Following the game CHS Head Coach Corey McGinnis said this about the team’s effort, “Well I’m proud of the team. The guys worked extremely hard and if we had gotten a break or two at the right time we could have won this game. Greeneville is a great team.”

This was a set of games that had both fan bases unhappy with the officiating at times but the games still had a good flow to them.