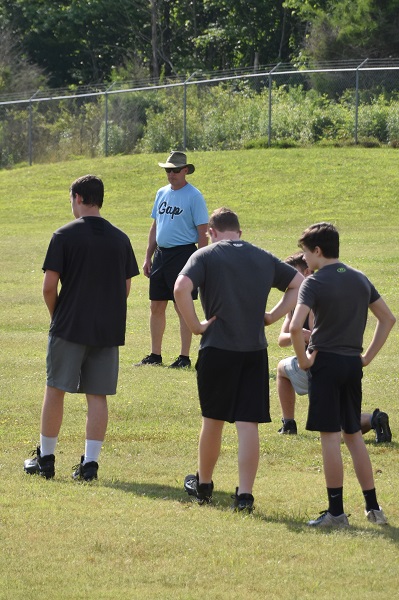 Cumberland Gap football opened it’s summer workouts up June 1 with guidance from the state government and the local school board. Social distancing is being applied to the way the coaching staff conducts these practices as well as temperature checks as the players and coaches arrive. The workouts are being done in stage format where the players rotate between stages before all gathering on the practice field for group workouts.

Coach DeLynn Cline spoke about how things have changed, “These practices are really different than in past years. Our kids come in and go straight to Mrs. Mara Brock for our temperature checks before being allowed to participate. They say we have to have groups less than 50 people and that’s not a problem for us now as we are working out less than that due to work and vacations.”

When asked if he was worried about schools going back earlier than local high schools Cline said, “Well, the programs in our classification went back the same time or later than we did so it’s not such a big deal to us. I do wish the TSSAA would have waited to start us all after the dead period.”

When asked how he felt about the proposal of playing without fans in the stands, “There is no way we could do that. We just don’t have the funding to pay all the officials without fans. We had an issue with uniforms and that wiped out our account and COVID-19 hasn’t allowed us to have our golf tournament which is a huge fundraiser for us.”

Cline added, “The thing I don’t want to happen is that we all come back and it worsens causing us to have to shut down again.”

The decision about how to get the kids back in school has still not been made and that will impact the way football teams prepare for their season. Coach Cline is just one of many waiting on that decision to be made.

This year’s Panther football team will have less than five returning starters but Cline is hopeful he has players ready to step up into those spots.