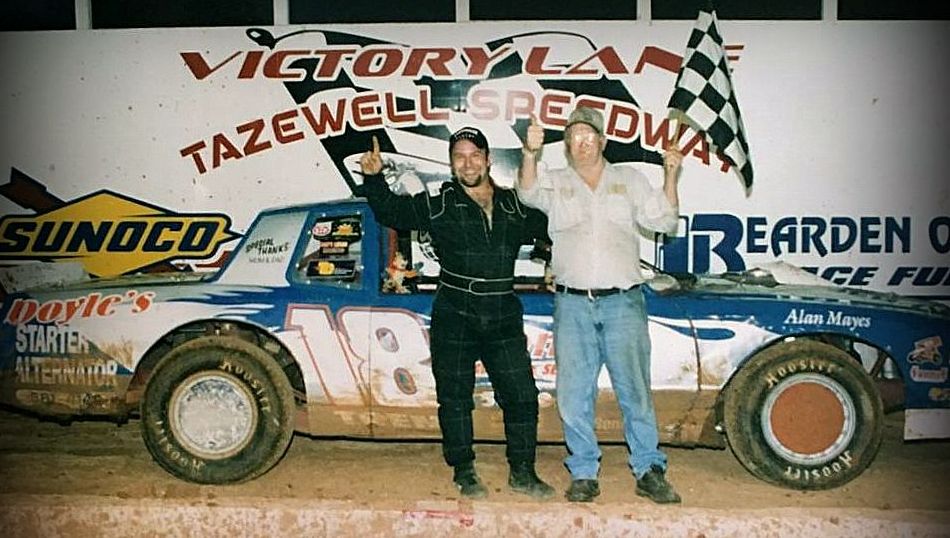 Tony Trent is a racer’s racer. His father, the late Perry “Red” Trent was instrumental in leading him to the sport. His mom is Mary Trent and they used to take young Tony to Newport Speedway to watch Red Bedford, Herman Goddard and L.D. Ottinger race.

His love of racing was joined by his wife Leann and they have been married for 26 years and they have a 16 year old son, Landon. His first race machine was a 1973 Nova SS during the 1996 season at Volunteer Speedway.

Trent started in the 22 spot because he wanted to learn. He was cruising through the field but then spun in front of everyone he worked so hard to pass. It was a learning experience that he hasn’t forgotten.

Trent talks about who helped him start the sport, “When I started out me and my brother (Tim) couldn’t afford to both race so we split on a car and he would drive one week and I would drive the next. Believe it or not we both done really good.”

He has a larger crew helping now including Frankie and Johnny Bolden, Tim and Landon. He has financial help from Morristown Towing and Automotive, Allen Paving, Terry Britt Welding and Fabrication and Leann Trent with Wallace Hardware, Industrial Sales.

Tony spoke about some of his best and worst moments, “I have so many great moments, my first win at I-81 Speedway in 1997, first championship at Tazewell Speedway in 03  but I guess winning the World 100 in 2013 as the tire specialist for John Blankenship is my best moment in my racing career.”

Trent continued, “My worst moment would have to be when I lost my dad to cancer in 06, he was always by my side in anything I did.”

Trent isn’t sure how many times he has visited victory lane, “I’m not really sure how many races I have won in all the things I have raced but I do know I have lost a  whole lot more than I have won. I have won Championships as a driver (2) in the Modified Street class (03,06) and one Lucas Oil National championship with Don O’neal at Clint Bowyer Racing in 2013.”

Trent wanted to say thanks to a few people for helping, “Thanks to my wife for putting up with me for all these years, my brother Tim for always having my back, my mom and my late dad, and everybody that has supported me from on and off the track in any way.”

His number 18 doesn’t hold anything special to him, “The number 18 has been on my go carts and race cars as long as I can remember but honestly, I just liked the way it looked.”

Trent is back to turning wrenches and chasing dreams on his own equipment and is still winning races at area tracks including Tazewell Speedway. He has learned from the best and had been part of big things in the national series but still loves to drive his #18 more than anything.