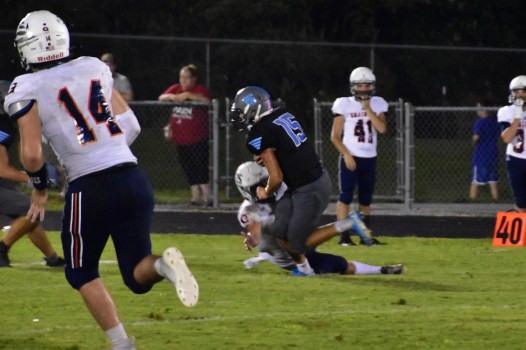 The Panthers football team finally hit the field, August 21. The pandemic has been a thorn in the side of most athletic plans but Cumberland Gap and Grainger, at long last, got the nod to kick the ball off and get the 2020 season started.

“Without scrimmages, no one knows what they have,” said Coach DeLynn Cline when asked what the key to a Panthers victory before the game began.”

The Panthers played mediocre during the first quarter on offense but were playing great on the defensive side.

It was during the second period when the first score was placed on the board. Grainger led 8-0 and then 16-0 before the Panthers finally found the end zone.

A Lance Owens pass found a wide open Logan Daniels who traveled around 50 yards for the first Panther score. They lined up for the extra point and ran a conversion play out of the formation that failed; however, Cumberland Gap had life and found that they could move the ball. The home team was down 16-6.

Grainger had one last drive but it fell short and the score at the half was 16-6 with the Grizzlies enjoying the lead.

At the halftime break the Pride of Cumberland Gap played an untitled performance that featured Queen’s Bohemian Rhapsody among other songs.

Logan Daniels did not return for the second half due to concussion protocol but the Panthers battled on; unfortunately, it wasn’t as pretty as the coaches had planned when the ball was kicked off.

Grainger benefited from a first and goal after a fumbled kickoff. One play later the Grizzlies found pay dirt and after the conversion led 24-6.

The Panthers next drive resulted in a punt and the Grizzlies found the end zone again to lead 30-6.

Owens to Logan Napier accounted for the next Panthers touchdown and what would be their final TD of the game. Owens kept the football and ran in the conversion making the score 30-14.

Grainger scored twice more and ran their point total to 44. The game ended with the Grizzlies getting their first win of the season, 44-14.

The Panthers had some players bothered by cramping at inopportune moments in the game and that allowed the Grizz to move ahead but overall the coaches saw some good things.

Cline spoke about the good and bad, “Our defense played pretty good until we started having players fall out with leg cramps and we looked to the sidelines at one time and didn’t have any players there to fill the spots. That is one thing we need. We need players to come out of the school and help us.”

Cline was happy with his offense overall, “Well, when we did the right things we were able to move the ball.”

The Panthers (0-1) are off next week with a bye and will use that time to get players healed and ready for Meigs at home September 4 in an important conference battle. Kickoff is set for 7:30.