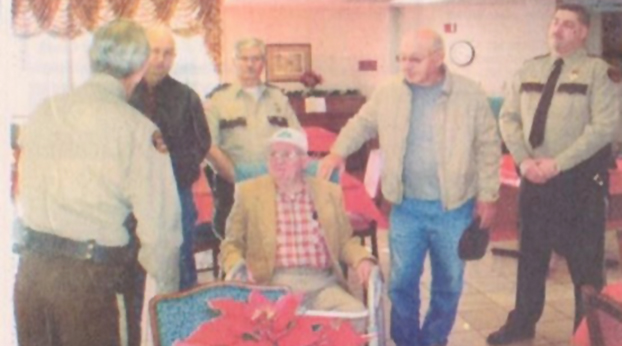 A clipping from the Dec. 22, 2004 edition of the Claiborne Progress shows a photo of the presentation commemorating A.C. Hurst’s status as the state’s first honorary constable. Then-constable Howard Walker is shown presenting a commemorative plaque to Hurst, who is sitting in the photo. He is surrounded by then-commissioner Dennis Estes, Clyde “Mush” Breeding, 8th district constable Steve Murphy and 6th district constable Kenneth Evans. (photo courtesy of Zachery Mullins)

Zachery Mullins, who is the Claiborne County commissioner for the 4th district, plans to present a resolution in September that will honor his great-uncle, the late A.C. Hurst.

For 34 years, Hurst honorably served as the county constable, reportedly making lifetime friends as he quietly went about the business of keeping order and ensuring that the citizens of Claiborne County were safe.

Up for vote will be a resolution that calls for the naming of a bridge in honor of the late constable. Mullins is currently in contact with state representative Jerry Sexton to determine which of two bridges would better suit the name change.

Mullins says it’s been narrowed down to either Baylor’s Bridge or the concrete crossing located just as drivers turn onto Lower Caney Valley Road.

Hurst was appointed on April 20, 1970 by the Quarterly County Court, now known as the Claiborne County Commission, to fill the vacancy left in the 4th District. He was sworn into office the following day and elected to a full term in August of 1970.

He was a U.S. Army veteran prior to his 34 years as constable.

When news of the proposed resolution hit social media, several friends and relatives commented on their memories of the late constable.

“A.C. was kind to everyone. I’ve never heard anyone speak ill of him. A great tribute for a Claiborne County political icon!” said county resident Craig Whitaker.

Eleanor Yoakum, chairman of the board of directors at First Century Bank, echoed the sentiments.

“(This is) so well deserved. I am pleased for AC’s family and friends to see this happen. (A) beautiful tribute to a really good man,” said Yoakum, whose father, the late Glenn Yoakum, while county judge had performed the official swearing-in ceremony of Hurst on April 21, 1970.

Hurst was recognized in 2004 as Tennessee’s first honorary constable. A letter was read during the official presentation ceremony on Dec. 18 of that year that accompanied the plaque acknowledging the honorary lifetime position.

“Every community has one person that his/her good deeds leave a lasting memory in the hearts of its citizens. The 4th District is no exception. The people of this district know a man who has spent his life trying to protect the well-being of others.

“In bad weather, he has carried heating oil to people in need, picked up and delivered prescriptions to the sick, drove people to the doctor, fed cattle when the owners were either sick or on vacation. He patrolled Springdale School for years, trying to protect the students and teachers from those that disrespect school speed zones. I doubt if he knows how many accidents he prevented or how many funerals he escorted.

“This man furnished his own car, insurance, gasoline and repairs. He had a thankless job no one else wanted. He had some that would do him physical harm. He received no pay for all his efforts.

“Who would have such a job and then keep it for 30-plus years,” said Howard Walker, who was elected constable of the 4th District upon Hurst’s retirement.

Walker later said he was told by several voters that Hurst would have been their choice if he had been running for the position.

“There has never been a lawsuit filed against this constable, and he could still get elected today. That means this man can be trusted,” said Walker, during the ceremony.