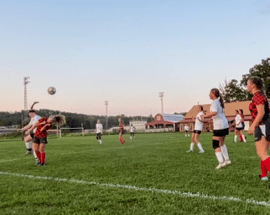 Kate Welch up with the header (Photo submitted by Coach Kimbrough)

The Lady Panthers remained perfect but during this September 8 match they earned it.

Scott High played well as the home team and got out early on the Panthers but they rallied late and got the win at 3-2.

With the game tied at two, Brianna Goins kicked in the winning goal with only three minutes or so remaining in the match.

Aly Ramsey had two goals and one assist. Brianna Goins also kicked in a goal. Amelia Serrenho had a single assist along with Alana Stallworth. Allison McCorkel had a solid game in net with five saves.

The Lady Panthers next game will be on the road again against Harriman.

Daniels shines between the posts as CHS rallies to…