Bulldogs defeat Knights and move to 7-1 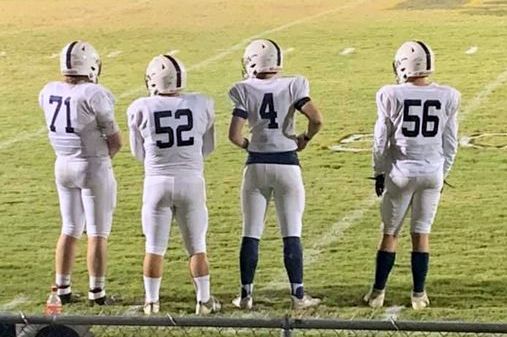 The Bulldogs loaded the buses and traveled to the land of the Black Knights, October 16.

Claiborne is a one loss team that was looking to move to 7-1 on the season but standing in their way was a very good Chuckey-Doak team that has played up a few games this season and had a record of 3-3 but have beaten the only team that Claiborne had lost to.

Coach Nathan Medlin had high praise about this team, “They are a really good team. I think that we have to try to limit them in the run game first. They have a really good running back and their quarterback is a very mobile runner as well. Their quarterback is very good at reading a defense when he throws the football. He doesn’t make a lot of mistakes and usually gives their team a great opportunity to be successful every play. Playing games like this is what its all about. A big time game, huge implications for regional championship and playoff seeding on the line.”

The Bulldogs were looking for a win and a possible home playoff game as the ball was kicked off. Claiborne kicked off but it was the Bulldogs who struck first. Storm Livesay went 10 yards for the score and Alex Bailey hit the point after.

The first quarter came to a close with Claiborne leading 7-0.

Eli Stone moments later stepped in front of a Knight’s pass and took it to the house. The pick-six went for 80 yards but Claiborne missed another extra point but held a comfortable lead at 19-0.

Claiborne received the second half kickoff and the defenses kept slowing down the opposing offense; however, Storm Livesay broke the Knight’s defense with a 67 yard touchdown run but again the Bulldogs missed the point after try. The score was at this time 25-0.

Before the third quarter ended the Knight’s scored but missed the two point conversion try.

When the final quarter got underway Claiborne responded to the Knight’s score. Ervin got his second touch of the night on an 11 yard run. The Bulldogs went for two and failed but had extended their lead to 31-6.

Claiborne wasn’t done as Livesay once again scored. This time he went for 19 yards but the PAT didn’t find its mark.

The game ended with the Bulldogs shocking the Black Knight and fans 37-6. The Bulldogs are now 7-1 and will battle their rival across the river October 23 at home and try to break a losing streak to the Panthers which now sits at three.

Coach Medlin after the game, “The boys played their butts off tonight.”