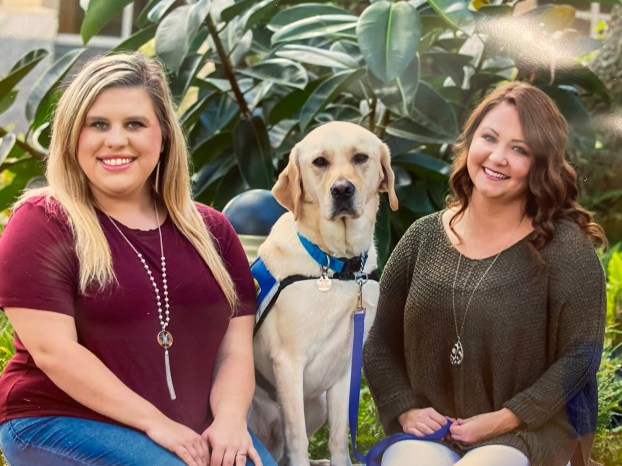 Orville the therapy dog is making a difference in the lives of traumatized children. Seated left of Orville is forensic interviewer MacKenzie Adkins. On the right is victim advocate Michella Blackburn. Both women are with the Claiborne Children’s Alliance serving Campbell, Claiborne and Union counties. (photo submitted)

A comfort in time of chaos; Orville earns his keep

Orville the therapy dog has hit the floor running to provide comfort in a time of chaos for suffering children. A person would do well not to underestimate the mixed Labrador retriever. Orville has successfully blended his innate knack of the gentle touch with the intensive training he received from Canine Companions for Independence.

The facility dog met two of his future colleagues in Orlando, Florida during certification training. The Claiborne Children’s Alliance sent forensic interviewer MacKenzie Adkins and victim advocate Michella Blackburn to soak up an intensive week of instruction before bringing Orville home to his vocation in Tennessee.

The 28 month old was raised at the Canine Companion Center with the goal to turn the Lab into a calming influence for children during otherwise anxious and high stress situations. Orville’s main job is to help during forensic interviews and court trials, said Melissa Cain, administrative assistant for the Campbell County Children’s Center.

“The purpose of a forensic interview is to lessen the trauma of child abuse victims by minimizing the redundant interviewing process in a child friendly environment, such as our Children’s Center. Sometimes interviews are able to be played in court and entered as evidence, however, in other situations the child is required to testify,” said Cain.

Adkins, who will be working closely with Orville, says the facility dog will be a huge asset.

“Children often get very emotional during the forensic interview. I have to stay as unbiased as possible on camera, but Orville will be able to offer comfort and support to these children as they tell about their traumatic experiences.

“There are times when I, as the forensic interviewer, am able to testify on behalf of the child. But, there are also times when the children will confront their abuser on the witness stand. Orville will be right beside them in those instances. He can give them courage to tell their horrifying story and help bring justice that these children deserve,” said Adkins.

Jared Effler, attorney general for the 8th Judicial District, says the acquisition of a second facility dog was necessary in order to better-serve the children. Before Orville, there was just the one dog covering 5 counties, he said.

Lucia will now concentrate her efforts in Scott and Fentress, while Orville handles Campbell, Claiborne and Union counties.

“We’re just super excited. We saw how effective Lucia was and felt we were doing the children across the district a disservice if we don’t have them a dog every time. Anytime a dog will be a benefit, we’ll now have one there, regardless of which county,” said Effler. “I just can’t say enough good things about how effective and efficient the facility dogs are in assisting us in prosecuting child abuse and neglect cases. They are an absolute game-changer.

“It is just a natural bond between a child and a dog that puts them at ease and allows them to navigate what is a terrifying situation.”

He says he was given a real “eye-opener” during a bass tournament held prior to the pandemic outbreak.

“My family and I took our dogs with us. I really was tuned into how the children reacted to them. Literally, every child in Bass Pro that came into contact with our dogs gravitated towards them,” said Effler, of the event.

Tracie Davis, executive director of the Campbell County Children’s Center, says she is a firm believer of the therapy dog program.

“A lot of times, children will feel more comfortable with an animal and they will talk to an animal when they are uncomfortable talking to a person,” said Davis. “Orville has the sweetest personality and loves people. He is very well disciplined which was part of the training.”

Davis says the program is set up in such a way as to insure complete compatibility with the staff with whom the therapy dog will work.

“Orville has been amazing. He is already working with forensic interviews. We had one child that was very hesitant – did not want to go (into the interview) at all and didn’t really even like animals. (The child) walked right back to the interview room with him.

“I think children know and they sense. He is very loving and calm and child-friendly,” said Davis.

Another plus to having Orville there, Davis says, is his constant presence with the child when the interviewer might have to do a quick step-away.

“I am very grateful to Jared Effler for suggesting this program. Most of all, I’m grateful to the staff for their willingness to take on this extra responsibility because they believe in the services we provide.

“It’s been a blessing to the children we serve and I’m honored that we’ve been given this opportunity,” said Davis.

Alaa Ahmad A Shelby County man must repay the state for services he received while he was fraudulently enrolled in... read more