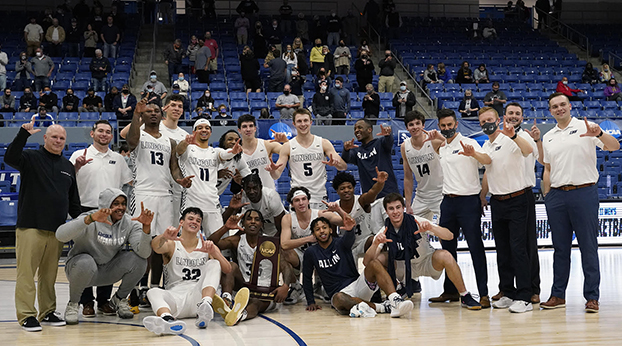 For the third time in six years the Lincoln Memorial University men’s basketball team will be headed to the NCAA Division II Elite Eight after capturing its third Division II Southeast Regional Championship Tuesday night with a resounding 103-67 victory over fourth-seeded Emmanuel College (Ga.) inside B. Frank “Tex” Turner Arena. Improving to 3-1 in NCAA Southeast Regional Championship title games, the Railsplitters (18-3) knocked down 18 three-pointers and shot 58.7 percent from the field.

Scoring 60 second-half points on 68.8 percent (22-of-32) shooting, LMU held the visiting Lions (17-7) to 6-for-21 from outside after Emmanuel made 27 threes in its first two Division II Southeast Regional Championship games. Led by a career-high 37 points on 10-for-14 three-point shooting from junior forward Jordan Guest, the Railsplitters never trailed in the regional championship title game. Guest’s 10 made threes were just one shy of tying the single-game program record (Trevon Shaw versus Mars Hill on Dec. 11, 2017).

Going 8-for-15 (53.3 percent) from deep in the first half and 10-for-18 (55.6 percent) from long range in the second half, LMU combined its superb shooting from distance with a strong interior presence. The Railsplitters scored 38 points in the paint and held a plus-10 margin on the glass.

Reaching the century mark for the 10th time of the season, LMU showcased its high-octane brand of basketball with excellent passing. Assisting on 27 of their 37 made field goals and committing just 10 turnovers, the Railsplitters scored 19 points on the fast break and got 25 points off the bench.

Extending their home win streak to 30 with the Division II Southeast Regional Championship title win, the Railsplitters have now completed 11 undefeated seasons at home, including four in the last 11 years.

Neither team scored for the opening two minutes before a corner three by junior point guard Julius Brown put the scoreboard in motion. A put-back dunk by Guest gave LMU an 8-2 lead four minutes in and the Railsplitters led 12-5 at the first media break.

An 11-5 Lion run over a 3:17 stretch got Emmanuel within two at 15-13 with 11-and-a-half minutes remaining in the half, however, it would be as close as the visitors would get for the rest of the night. LMU went up 30-22 on a three from sophomore point guard Jeremiah Keene as the Railsplitters started the game 6-for-10 from downtown. Senior guard Alex Dahling willed his second three-pointer through the hoop with just over four minutes to go before halftime, giving LMU its first double-digit lead of the game at 38-27.

Guest’s offensive eruption began early in the second half with back-to-back triples putting LMU back up by 14 at 49-35 two minutes in. The first six-and-a-half minutes of the second half set the tone for the remainder of the night with the Railsplitters completing a 20-7 run to extend their lead to 23 at 63-40 on another Guest jumper. A 13-6 run over three-and-a-half minutes of play was capped by a three from redshirt junior guard Cameron Henry, giving LMU its first 30-point advantage at 76-46 with 10 minutes to go.

Emmanuel made its last push with an 11-6 run over a two-and-a-half minute period, clawing back within 25 at 82-57. Guest then went on another tear, nailing his final three treys in only a minute-and-a-half of action to stretch the Railsplitters’ lead out to 35 at 95-60 with five minutes left.

Going deep into its bench in the closing minutes of the championship affair, LMU held its largest lead of the night (36) following a dunk by redshirt senior forward Shaquille Rombley. Neither team scored in the last 1:42 of play.

Guest scored 28 of his game-high 37 points in the second half on 10-for-14 shooting. Henry finished with 18 points, five assists and four rebounds, while Dahling recorded his second career double-double with 11 points and 12 rebounds. Redshirt sophomore guard Xavier Bledson was once again phenomenal off the bench, tallying 12 points and a game-high six assists in 20 minutes. Playing 25 valuable minutes off the bench, Keene scored nine points on 4-for-8 shooting and distributed five assists.

For his remarkable performance in the title game, Guest was named Division II Southeast Regional Championship Most Outstanding Player. The 6-foot-9 forward’s 37 points represent the most scored in a game by a Railsplitter since former guard Courvoisier McCauley reached 44 points against Lenoir-Rhyne in December of 2019. Averaging 17.5 points on 63.6 percent shooting, six rebounds and 3.5 assists in LMU’s two Division II

The Railsplitters are now 17-8 all-time in NCAA Championship games and 14-6 in Division II Southeast Regional Championships.

Up Next…
LMU moves on to the 2021 NCAA Division II Elite Eight held next Wednesday-Saturday, March 24-27 inside the Ford Center in Evansville, Indiana. The Division II Men’s Basketball Committee will seed the field’s eight teams on Wednesday, March 18.