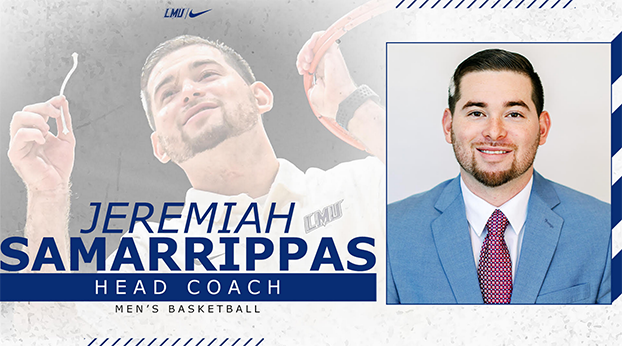 “We are very excited that Jeremiah will be the next head men’s basketball coach here at Lincoln Memorial University,” spoke Director of Athletics Jasher Cox. “LMU is getting a young, hungry, and passionate coach who I believe will continue building on the foundation we now have in place. He gives us continuity, leadership, and a bridge to the success that coach Schertz left behind.”

“I am honored and thrilled for the opportunity to continue to serve this outstanding university,” remarked coach Samarrippas. “I’m grateful to the Board of Trustees, Dr. Pete DeBusk, President Dr. Clayton Hess, Vice President Dr. Jody Goins, and our Director of Athletics Jasher Cox for entrusting me with the chance to lead this storied program and continue to develop quality student-athletes that represent LMU with the highest regard. I also want to thank my mentor and close friend, Josh Schertz. Given the opportunity to learn and develop under his leadership has been life-changing and invaluable.”

“Over the seven years that I have been a part of this program, the Railsplitters have been one of the premier Division II teams in the nation,” continued Samarrippas. “It is my goal to continue what coach Schertz has built here, holding men’s basketball to the highest standard both on and off the court.”

“I am incredibly happy for Jeremiah, he’s been an integral part of our success over the last seven years and is more than deserving of the opportunity to lead his own program,” commented Schertz, who was named the 26th head men’s basketball at Indiana State on Wednesday, March 17. “He has a great understanding of LMU, along with being a fantastic recruiter and teacher on the court. LMU has made a terrific hire, and there is no doubt the future of Railsplitter basketball is incredibly bright with Jeremiah leading the way.”

Hired as a full-time assistant following the Railsplitters’ run to the 2016 NCAA Division II national title game and a program-record 34 wins during the 2015-16 season, Samarrippas has played a pivotal role in LMU’s recruiting efforts over the past seven years. Throughout his time helping further the national footprint of Railsplitter basketball, Samarrippas has recruited the likes of All-Americans Chris Perry (2017), Courvoisier McCauley (2020), and Devin Whitfield (2021). Additionally, he was key in bringing 2021 Division II Elite Eight All-Tournament Team member and 2021 Division II Southeast Regional Championship Most Outstanding Player Jordan Guest to east Tennessee, along with All-SAC guards Cornelius Taylor and Anthony Brown.

A protégé of one of the most successful college basketball coaches of all time, Samarrippas has been instrumental in the development of LMU’s guards over the last seven seasons. Under his tutelage, seven of Samarrippas’ guards were named All-SAC since the 2016-17 season, including six of whom, claimed all-region accolades.

In addition to his recruiting and guard development responsibilities, Samarrippas has been influential in the team’s practice plans, game strategy, scouting, play calling, scheduling, and travel planning. His one-on-one coaching sessions and positional group practices have been invaluable to the Railsplitters’ recent success.

Over the past two seasons, Samarrippas stepped into a larger role as an assistant coach and was LMU’s top assistant for the 2020-21 season. In 2019-20, the Railsplitters had their best season in terms of winning percentage at 32-1 (.970) and went unscathed in conference play (22-0) for the third time in five years while winning their eighth SAC regular-season championship and fifth SAC Tournament title. Going 51-5 over the past two seasons, LMU won a program and SAC record 39-straight games from Nov. 2, 2019 – Jan. 6, 2021. Securing their league-record ninth SAC regular-season title in 11 years and 14th combined SAC championship, regular season, and conference tournament, since 2011, the Railsplitters won their third Division II Southeast Regional Championship and reached their third Division II Final Four in the last five NCAA Elite Eight championships in 2020-21.

A 2014 graduate of Tennessee Tech University in Cookeville, Tennessee, Samarrippas was a starting point guard and career 1,000-point scorer at the Division I level. Serving as team captain of the Golden Eagles, Samarrippas averaged 10.4 points, 4.8 assists, 2.5 rebounds, and 1.3 steals per game during his senior campaign. He recorded comparable numbers in his first season at Tennessee Tech after transferring from then Conference USA member Southern Methodist University in Dallas. Named to the 2013 Ohio Valley Conference All-Newcomer Team following his junior season in Cookeville, Samarrippas served as the Mustangs’ starting point guard as both a true freshman and sophomore. During his two years at SMU, Samarrippas averaged 7.4 points and 3.4 assists in his inaugural collegiate season before posting 6.9 points, 4.2 assists, and 2.2 rebounds as a sophomore.

Upon graduating, Samarrippas turned down numerous professional contract offers to pursue a career in collegiate coaching.

A native of Bartow, Florida, Samarrippas was a heralded recruit after being named Class 5A Florida High School Athletic Association (FHSAA) Player of the Year and finishing third in Florida’s Mr. Basketball voting. A two-time all-state first-team selection at Bartow High School, Samarrippas led the Yellow Jackets to a 25-5 record and the Class 5A State Championship as a senior.

Samarrippas received his bachelor’s degree in interdisciplinary studies from Tennessee Tech and earned his Master of Educational Leadership (M.Ed.) from LMU in 2016. He resides in Harrogate.

WHAT OTHERS ARE SAYING

“Congratulations to coach Samarrippas and Lincoln Memorial University for naming Jeremiah as the new head men’s basketball coach. I have known Jeremiah since he was a high school senior before coaching him at SMU. He has been a winner and leader at every level, and it will be no different as he takes over the reins at LMU. Jeremiah was one of the smartest players I have ever coached. He sees the game at a different level. In addition, he has a great personality that aided in recruiting good players and building team chemistry. Coach Samarrippas will be a rising star in the world of college basketball. I am so excited for Jeremiah and LMU basketball. Go Railsplitters!”
Matt Doherty, former UNC men’s basketball head coach

“I’m extremely happy for my friend! We came in and evolved together in this business. He’s a stud and was an integral part of the success at LMU over the past seven seasons. I can’t wait to see where he takes this thing!  Go Railsplitters!”
Omar Wattad, Lander University men’s basketball head coach

“Jeremiah is one of the smartest players I’ve had the luxury of coaching over my 25-year career. He was a coach on the floor for us at SMU, and he will be a great coach and leader at LMU.”
Pooh Williamson, Oklahoma men’s basketball assistant coach