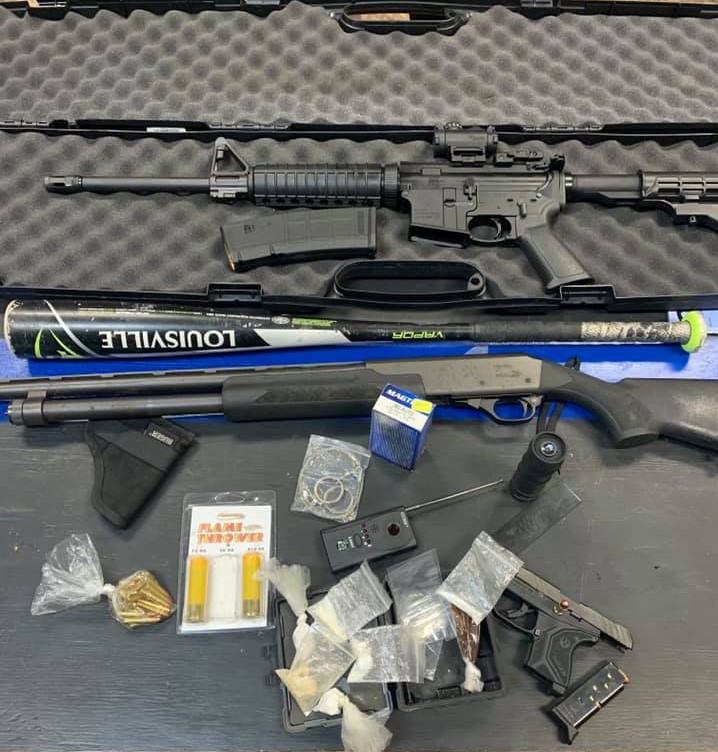 Shown is the collection of firearms and drugs confiscated during the incident.

A disgruntled driver decided to engage the occupants of a second vehicle in a public physical altercation following what was later determined as an intentional act of aggression. The Tazewell Police were dispatched to the scene of a fight in progress at the intersection of Youngstown Road and U.S. Hwy 25E.

According to a news release, officers Jeff Green and Megan Karg determined that a white sedan, driven by Maynardville resident Eric Ericson, had rammed a red Lexus prior to the public display of fisticuffs.

Ericson, 43, allegedly jumped back into his car and fled the scene, heading southbound with notable front end damage to his vehicle.

The two officers came upon the Ericson vehicle stopped in the Springdale community near the intersection of U.S. Hwy 25E and State Hwy 33. Meanwhile, officer Green found the red Lexus and assisted its relocation to the intersection.

The release states that further investigation found that both parties knew each other and that Ericson had intentionally rammed the Lexus.

While on scene, officer Green found an assortment of contraband inside the Ericson sedan including a pistol, shotgun and rifle. Further investigation unearthed what is believed to be an assortment of schedule I and schedule II drugs.

Ericson, who was arraigned the next day, is currently out of jail on a $10,000 secured bond.