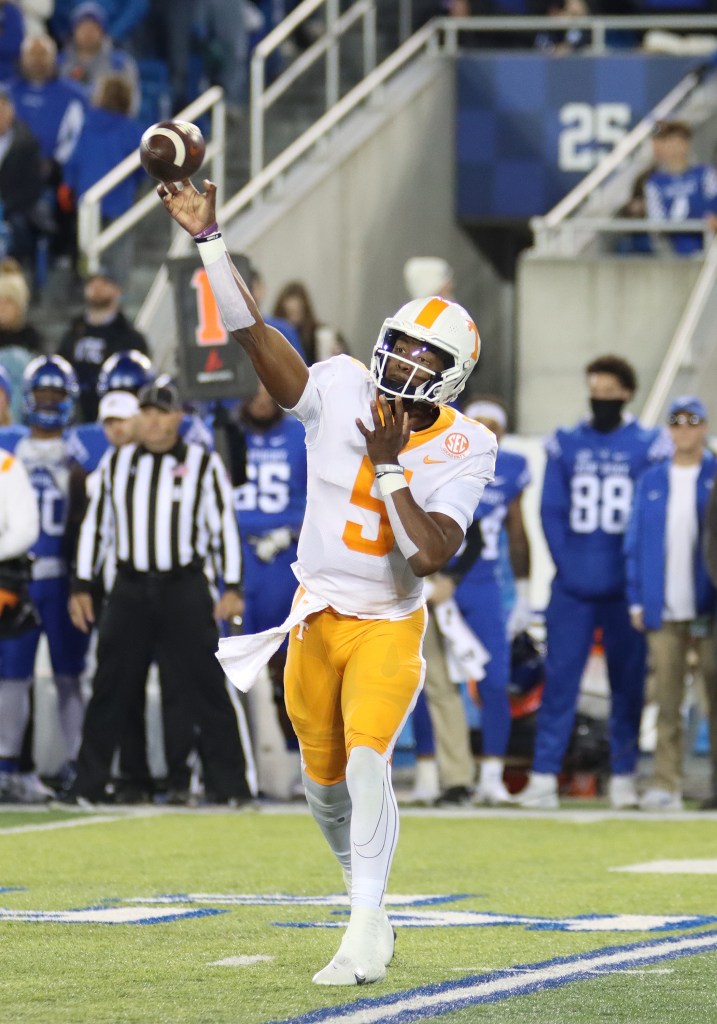 With Tennessee football set to close out non-conference play this weekend when it plays host to South Alabama, defensive coordinator Tim Banks, defensive line coach Rodney Garner and select players visited with members of the media Tuesday inside the Neyland-Thompson Sports Center.

Both teams enter Saturday’s game with 5-5 overall records and hopes of clinching bowl eligibility. Without looking too far ahead, sophomore running back Jabari Small noted his anticipation for two more opportunities inside Neyland Stadium and embracing each moment as the season wraps up.

“At the end of the day, we get to play football,” Small said. “I feel like that’s our mindset right now. You can’t take these practices back, these games back. You don’t have that many opportunities, so we are trying to take advantage of our opportunities. We’re all fired up. You know we get to play at Neyland two more times and just strap it up again, so it’s fun.”

Banks was recently announced as a nominee for the Broyles Award, presented annually to college football’s top assistant coach. Now in his 15th season as an FBS defensive coordinator, he was quick to pass the praise to his players and his defensive staff.

Banks’ unit has racked up 76 tackles for loss on the season, a mark that ranks top 10 nationally and second in the SEC. In his comments Tuesday morning, Garner commended Banks’ flexibility and his ability to scheme the defense based on personnel.

“I think Coach Banks has done a remarkable job,” Garner said. “He’s a great leader. He’s very smart. He’s flexible. Obviously, he tries to cater what we’re doing to what our talent level is and what we are capable of doing. He’s open to suggestions. I think he’s a really good leader. The kids believe in him, the staff believes in him, and he’s a great guy to work with, just like this entire staff. I think that’s that one thing Coach Heup has done, he’s put together a group of remarkable men that right now get along well and work well together, good chemistry.”

SALUTE THE TROOPS: Saturday’s game against the Jaguars, set for a 7:30 p.m. kickoff on ESPNU, will serve as UT’s annual Salute to Service game. Vol Village will feature Salute to Service activations, including a flight simulator and military vehicles. At halftime, Army and Air Force ROTC Cadets will conduct a joint contracting ceremony, then the Pride of the Southland Marching Band will perform a patriotic-themed show featuring a live performance by Lee Greenwood.