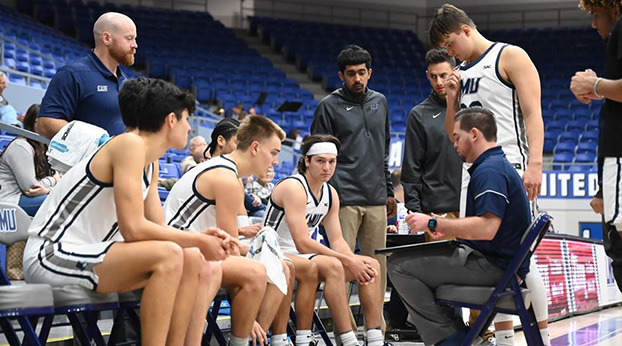 The Lincoln Memorial University men’s basketball team (25-4, 21-3 South Atlantic Conference) earned the No. 3 seed in the NCAA Southeast Regional, as announced by the NCAA Selection Committee on Sunday night.

The Railsplitters will travel to Augusta, Georgia as Augusta University earned the top-seeded in the region after recording a 28-3 overall record while going 15-3 in Peach Belt Conference action. Lincoln Memorial will square off with Georgia College (21-7, 13-5 PBC) on Saturday, March 12. The game time is to be determined.

The Railsplitters have been among the nation’s top premier programs this season, sitting in the NABC Top 25 all season. Lincoln Memorial comes into the contest with one of the most potent offenses in the country as they tally 87.8 points per game, which ranks ninth-best in the nation. On the court, LMU is lead by redshirt sophomore Chase Rankin and junior Jordan Guest. Rankin, a First Team All-SAC selection, currently tallies 13.4 points per game and dishes out staggering 5.9 assists per game. Guest, a Second Team All-SAC selection, finished the season leading the team in scoring with 16.9 points per game and neared a double-double average with 7.4 rebounds per game. Guest was named to the 2022 Bevo Francis Award Watch List, an award given to the nation’s top small college basketball player.

Georgia College is making their return to the NCAA Tournament for the first time since the 2009-10 season and make just their sixth NCAA appearance in program history. Under the direction of eighth-year head coach Mark Gainous, who was selected as the 2021-22 PBC Coach of the Year. The Bearcats are 21-7 entering the NCAA Tournament after reaching the quarterfinals of the Peach Belt Conference Tournament.

Fans should stay tuned for more information on the game time and ticket opportunities.