Halzle steps up from Vols’ QB coach to OC 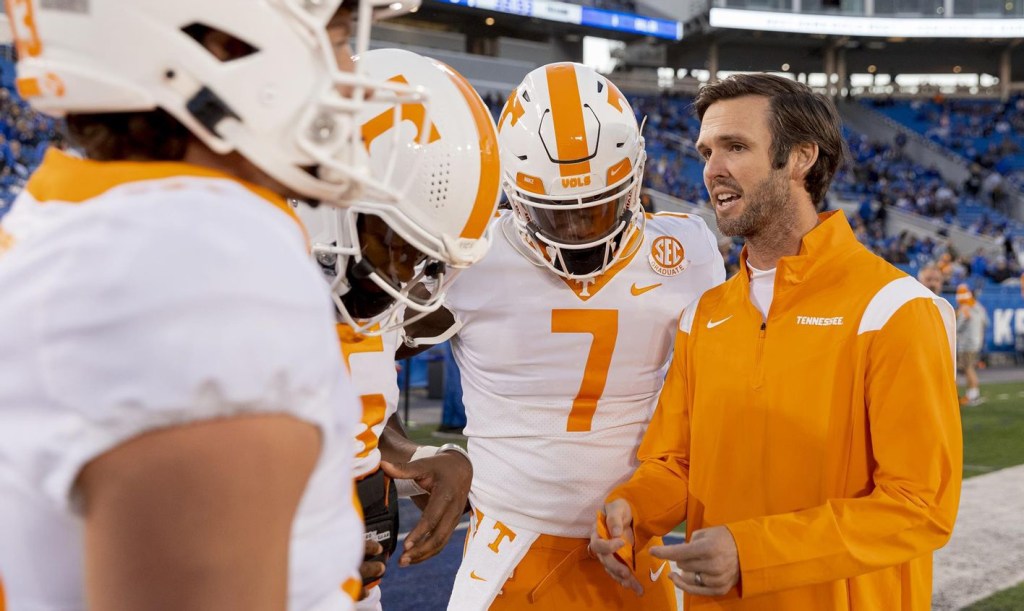 Joey Halzle, who has served as Tennessee’s quarterbacks coach during the most prolific two-year offensive stretch in school history, has been tabbed as the Volunteers’ new offensive coordinator, head coach Josh Heupel announced on Thursday.

“Joey has been instrumental in our record-setting offensive success over the past two seasons, and he’s built great trust within our team,” Heupel said. “I have known Joey for over 15 years, and his track record of player development has impacted every place he has been. He has complete knowledge of our aggressive offensive identity and principles. Having played and coached at this level, he understands how to connect with players and will continue to make a significant impact in recruiting. This will be a seamless transition for him as we strive to build a championship program that Vol Nation is proud of.”

Halzle (pronounced HALLS-lee) has occupied the coaches booth on gameday the last two seasons and will continue to coach the quarterbacks. The Vols are coming off the most productive two-year span of quarterback play in school history, a room that tossed for 70 touchdowns and only six interceptions on 794 attempts during that time frame.

“I am grateful to Coach Heupel for this opportunity, and I look forward to building on the dynamic offensive success we have achieved thus far,” Halzle said. “Our offense will continue to be the attacking, sophisticated and up-tempo unit that Vol Nation is accustomed to, while maximizing the potential we have as a team and individually. I have great appeciation for our players and want them to fulfill their aspirations at Tennessee. It’s our job as teachers to put them in a position to be successful—on and off the field—and have fun while doing it.”

Halzle was part of a memorable 2022 campaign that saw the Vols shatter 13 team offensive records en route to the program’s first 11-win season since 2001. Despite missing three of the SEC’s top offensive players, the season culminated with a 31-14 victory over No. 7 Clemson in the Capital One Orange Bowl. UT amassed 375 offensive yards against a scoring defense that ranked top 25 nationally.

It was Halzle’s quarterbacks who served as the catalysts for the Vols’ elite offensive identity. Quarterback Hendon Hooker was a finalist for the Maxwell Award and recorded the highest Heisman Trophy finish—fifth place—by a Vol in 25 years. He ranked second nationally in passing efficiency with a school-record mark of 175.51. Under Halzle’s tutelage, Hooker was named SEC Offensive Player of the Year by the league’s coaches and the Associated Press. Of the 28 FBS signal callers who fired 25 or more touchdowns, Hooker threw the fewest interceptions with only two.

When Hooker sustained a season-ending knee injury in the final month of the season, his roommate Joe Milton III carried the torch, leading the Vols to victories over Vanderbilt and Clemson. Halzle’s development of Milton saw the Pahokee, Florida, native finish the year with 971 passing yards on 53-of-82 attempts with 10 touchdowns and no interceptions.

Halzle’s recruiting prowess also was key as the Volunteers finished with a top-10 signing class according to 247Sports.com. Halzle signed one of the nation’s top-five overall players in five-star California quarterback Nico Iamaleava, who participated in bowl practices and is enrolled for the spring semester.

Halzle has worked alongside Heupel for 14 seasons dating back to Oklahoma. He spent two seasons on Heupel’s staff at UCF, serving as an offensive quality control analyst in 2019 before being promoted to quarterbacks coach in January 2020.

Halzle, a former Oklahoma quarterback like Heupel, spent the 2016 season as an offensive analyst and assistant quarterback coach at Missouri after serving in the same role at Utah State in 2015. Halzle teamed up with then-offensive coordinator Heupel as the Tigers produced the SEC’s No. 1 total offense, averaging 500.5 yards per game, good for 13th nationally. Quarterback Drew Lock finished the regular season with an SEC-best 3,399 passing yards, which ranked 10th nationally.

He earned three letters as a Sooner signal-caller from 2006-08, helping Oklahoma to Big 12 Conference titles each of those years and an appearance in the BCS National Championship Game as a senior. He was part of a skilled quarterback room that included Sam Bradford, who captured the 2008 Heisman Trophy in Halzle’s final season. Bradford was a consensus All-American, the No. 1 overall pick in the 2010 NFL Draft and the 2010 NFL Offensive Rookie of the Year.

Halzle graduated from Oklahoma in 2008 with a degree in human relations and went on to earn a master’s degree in administrative leadership in 2014.

Halzle and his wife, Cara, have two daughters, Elliott and Saylor, and one son, Colson.